A stunning 3,000 feet high, Yosemite’s El Capitan Wall is simultaneously breathtaking and intimidating. Ominously overlooking the world below, the granite wall has evoked fear in even the most seasoned of rock climbers. Which is why no one has ever been able to successfully climb it without the assistance of a rope, or “free solo” as it is referred in the climbing community. A stationary obstacle course of death, as it includes sections where one is literally hanging on with fingerprint size grip, conquering the wall has always been a dream of Alex Honnold.

Known as one of the best free solo climbers in the world, Alex has made a comfortable career defying the odds. Not that you would know it when looking at the van he lives in. Alex is not your average risk taker though, in fact, he is quite methodical in every aspect of solo climbing. His cold and calculating demeanor is an asset when scaling mountains, but a hindrance in his personal life.

It is this duality within Alex that makes Free Solo such a riveting documentary. Filmmakers Elizabeth Chai Vasarhelyi and Jimmy Chin do a wonderful job of painting a compelling portrait of a man who is frequently willing to risk his life in pursuit of his passion. Which is saying a lot considering that Alex’s inability to verbalize emotion, a point of contention in his relationship with girlfriend Sanni, will easily make him an unlikable character for some viewers. 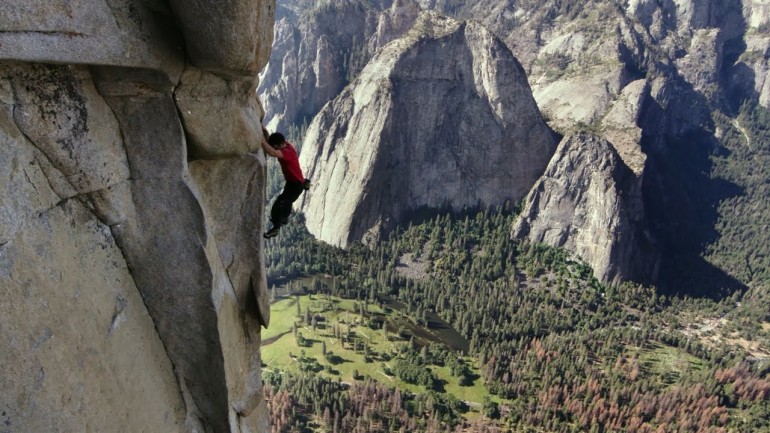 As one observes Alex as he trains for El Capitan, including doing several rope-assisted climbs on its most difficult stages, Free Solo effectively conveys just how daunting the task will be. Through stunning cinematography, compiling drone footage and a combination of camera crews on the mountain and on the ground, the film raises the tension with each miniscule grab, foot hold and adjustment Alex makes.

One literally feels as if you are climbing with him, as the film explains the various facets of El Capitan in a digestible way. The sense of depth and scope in Vasarhelyi and Chin’s visual storytelling is simply jaw-dropping. It is especially chilling when the film highlights the many climbers who died attempting free solo climbs around the world.

Free Solo is a stunning and suspenseful film that successfully displays the physical and mental fortitude needed to make one’s dreams a reality. To quote the camera man observing Alex below, “I can’t believe what I just witnessed.”