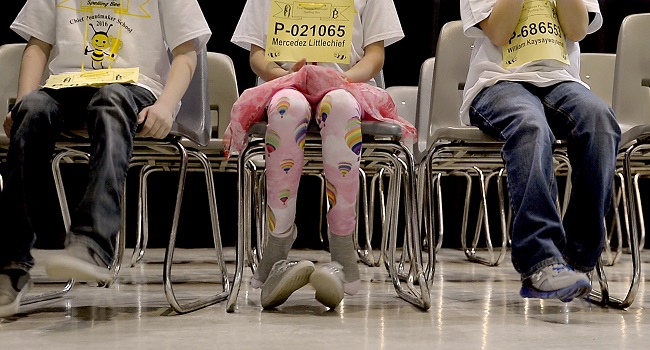 In a tension filled room, an audience sits on the edge of their seats, gazing at William Kaysaywaysemat III standing on stage. They wait in anticipation for the young man to open his mouth and spell a word into a microphone. Regardless of one’s personal views of such competitions in terms of spectator sports, it is an undeniably compelling moment. One of many that permeate Lana Šlezic’s Bee Nation.

As captivating as these scenes are, Šlezic’s film shows that it is not the competition itself that is important, but rather what it represents for the participants. Bee Nation follows a group of indigenous youths who are participating in the first ever province-wide First Nations Spelling Bee. Driven by their desire to be the best, and wanting to earn a trip to Toronto to compete in the National Spelling Bee, the children spend most of their free hours preparing for the competition

To these students, the Spelling Bee is much more than a competition; it is a stepping stone to a better future. Šlezic‘s film highlights a community that is poised to achieve great things, but is often not given the opportunities needed to succeed. Despite lack of government funding for their schools, which plays a key role in the eroding cultural identity when it comes to their native language, and the poverty that impacts many reservations, the people remain resilient in their faith that things will get better. They know that education is the key that will open the door to infinite possibilities.

An engaging and uplifting crowd-pleaser, Bee Nation reminds us that the First Nation community will not be tied down by the injustices of the past. They will continue to rise up and overcome by empowering themselves with knowledge.