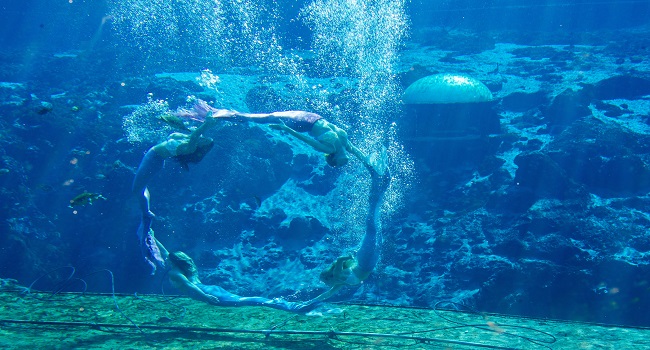 The myth of the mermaid has been told by the ancient Greeks, Inuit communities, and most famously in children’s fairy tales. Popular culture has also played a key role in perpetuating the allure be it the romantic charm of Disney’s The Little Mermaid or the dark musical fun of Agnieszka Smoczynska’s The Lure, our love of mermaids does not appear to be waning. Ali Weinstein’s Mermaids presents a rather unique perspective to this fascination.

Instead of reveling in the quirkiness of individuals who like to dress up as mermaids, Weinstein’s film ponders the therapeutic nature of such endeavours. As if putting on a new skin, many of the people she interviews, who live out their fantasies by adorning decorative fins, use mermaids as a coping mechanism to deal with many of the hardships life has thrown at them.

While the film touches on the commerce aspect of mermaid fandom, including the long running Weeki Wachee mermaid show and the mermaid themed Dive Bar, it is the personalities that keep this film swimming in the right direction. In Mermaids, Weinstein talks to numerous individuals such as Laurie and Rachel, mother and daughter duo who find a new bond over their shared mermaid interest; Julz, a transgendered woman whose love of mermaids helped her deal with issues related to growing up in the bible belt; and Ralph and Cookie, a couple whose 30-year relationship has lasted thanks in part to Cookie’s ability to channel the pain of childhood abuse into an empowering mermaid persona.

Featuring underwater cinematography that is both gorgeous and meditative, Mermaids is an empowering and hypnotic look at the healing power of the imagination and the sense of community it can provide. It is a film worth diving into.