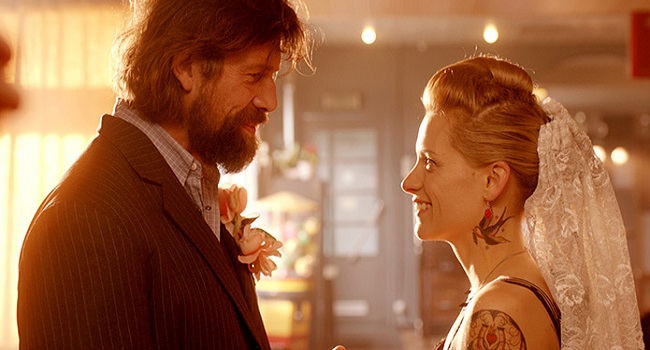 In Felix Van Groeningen’s beautiful and touching film The Broken Circle Breakdown, the link between joy and heartbreak is as pronounced as the music featured in the film. Even the seemingly euphoric bubble that love and family can create is not immune to the harsh realities of life. Like a slow leak, the air of love gradually evaporates until the two lovers are practically strangers again. It is a gut-wrenching reminder that love and pain are inherently intertwined.

The film centers around Didier Bontinck (Johan Heldenbergh), a banjo player in a bluegrass band, who meets and falls for a tattoo artist named Elise Vandervelde (Veerle Baetens). Like most budding relationships, their love affair is filled with intense passion and discovery. Over the years they find harmony not only through the music they sing on stage but also with the joys of parenthood. Unfortunately this all changes when tragedy strikes and Didier and Elise find themselves in an emotional tailspin.

Groeningen’s film explores the deep rift that losing a child can cause for a couple. Though The Broken Circle Breakdown tackles themes of love, loss, and grief, it never feels like it is trying to exploit the subject matter or the audience. By using a non-linear structure, Groeninger is able to emphasize the devastation that Didier and Elise feel while reflecting on the happier times at the beginning of their relationship. Similar to Francois Ozon’s equally powerful 5X2, the structure helps to elevate the couple’s dynamics in a way that may not have had the same impact had it been told in a traditional fashion.

The intriguing thing about The Broken Circle Breakdown is the way in which American culture is viewed as both a source of joy and pain. Treated like the land of infinite possibilities, Didier and Elise bond over their love of American bluegrass music. The bright glow of America is constantly in the background of their lives. Even as they celebrate the growth of their family, the shadows of 9/11 radiate from their television screen. As mystical as the country may seem, it still cannot avoid being the source of Didier’s projected rage.

While Elise expresses her grief by dissolving into a destructive cycle of self-pity, Didier has no other outlet but to turn his anger towards both God and American politics. He channels his pain, and feelings of being alienated by Elise, through a series of ill-timed outbursts. While he openly voices his displeasure with American laws against stem cell research and the unfair nature of God, it is obvious that Didier’s actions comes from a place of helplessness more than anything else. A way of trying to make sense of the sorrow that he and Elise feel.

The Broken Circle Breakdown does not hold any punches in its exploration of the joys and pains that come with love. The premise may seem simple, but the performances and raw emotion the film evokes makes for a bittersweet experience. The film will not only have you thinking about life and love, but it will also make you appreciative of the moments of pleasure that we are fortunate to experience.