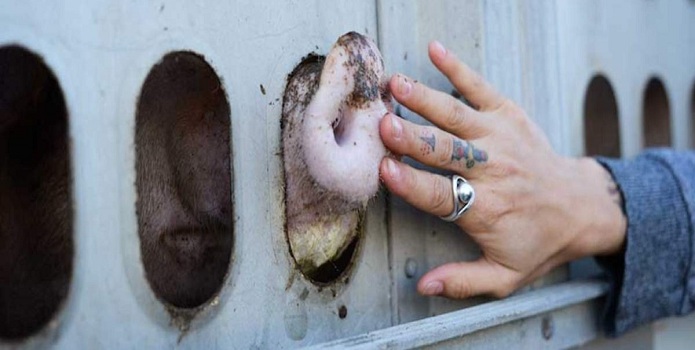 If animals can experience the same emotions of fear and joy as humans, then why are they not cared for like humans? This is the central question that drives the work of award-winning photographer and activist Jo-Anne McArthur. Spending over ten years of her life advocating against the mistreatment of animals worldwide, McArthur shows no signs of slowing down. At one point in The Ghost in Our Machine she even remarks “I’m trying to save the world” to a potential publisher. Though the statement is made in jest, there is a lot of truth behind her words.

McArthur aims to show the world that animals are sentient creatures, and should be treated as such. Using her camera as the primary instrument for change, McArthur travels the world documenting the many factory farms that raise animals for food and fur. Breaking into these establishments during off hours, her lens captures riveting images of animals in various stages of distress. The captivating thing about McArthur’s photos is how well she captures the personalities of the animals she observes. It is hard not to contemplate the existence of souls within animals after witnessing these images. This makes the situation even more heartbreaking as the realization sinks in that most of the animals featured will experience a full year of torture and abuse before they are ultimately killed.

It is stunning not only how large many of these factory farms are, but also the sheer number that exist worldwide. Many of them, including the one in Europe that we see McArthur and a fellow activist breaks into, are funded by “Western money.” Despite infiltrating numerous facilities, McArthur resists the deep temptation to liberate the animals herself. She knows that her photos can speak much louder from a global standpoint than freeing a few of the hundred trapped animals. The challenge of course is how to get the message across in a society that would rather see airbrushed images of celebrities instead of caged animals. Even the publishers who love McArthur’s work admit that it would be tough for them to market her images. This serves to only fuel McArthur’s mission even further as she knows the key to inciting change is to alter how people view animals in general.

Liz Marshall’s The Ghost in Our Machine is a film that wears its intentions on its sleeve from the opening frames. Regardless of whether or not you consider yourself an animal lover, the film wants to insight both meditation and discussion. Marshall makes a point to ensure that both sides of the issue are touched on in an intelligent manner. One of the ways she reinforces the notions of the sentience of animals is by wisely letting McArthur’s photos speak for themselves. It is hard not to get enraged when viewing many of the heartbreaking photos that appear on screen.

The photos clearly have impacted McArthur as she openly admits to suffering from PTSD (Post Traumatic Stress Disorder). McArthur’s candor about her condition is just as fascinating as the cause she is fighting for. Marshall could have easily delved into McArthur’s PTSD further, but ensures that the focus is kept on the animals. The Ghost in Our Machine does a good job of not only showing the hardships the animals endure, but also provides a sense of hope through the alternatives it highlights. Marshall notes the great things that organizations such as the Snooters Farm Animal Sanctuary are doing to nurse the abused animals back to health.

Powerful, and at times heartbreaking, The Ghost in Our Machine is an important film that should be seen. It is one of the must see documentaries of the year.