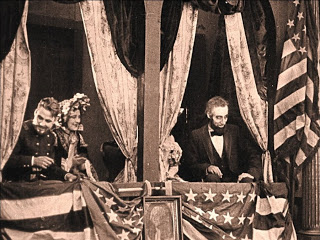 The one thing a film lover always strives to be is objective. A film lover attempts to judge each film, and film experience, on its own merits. However, objectivity can be a tricky thing when a particular film strikes a nerve. This was one of the things that I greatly struggled with while watching D.W. Griffith’s controversial film The Birth of a Nation.

Considered by many film historians to be one of the most important American works ever made, The Birth of a Nation is both a technical marvel and an infuriating piece of cinema. Released in 1915, with a running time of three hours, this epic silent film offers a dramatization of the impact that the Civil War had on the relationship between two families: The Stonemans and The Camerons. Broken up into two parts, the first section of the film chronicles everything from the start of the Civil War all the way up to the assassination of President Lincoln. The second half of the film, and most controversial section, focuses the Reconstruction era. In this section Griffith looks at the horrors that come with having a predominantly African-American legislature and the salvation that a newly formed group, known as Ku Klux Klan, offered.

If you look at The Birth of a Nation from a purely technical standpoint, the film is quite a marvel to behold. The Civil War battle sequences are well executed and felt lavish for the era in which the film was made. Griffith experimented with many different filming techniques such as the use of colour tinting, using the camera “iris” effect, high angle shots, and natural landscapes just to name a few. All of this helps to create a story that manages to sustain interest the entire way through. In fact, had the film been entirely based around the Pre-Civil War era, I would have been willing to overlook some of the politically incorrect qualities as merely being “just a product of its time.”

Unfortunately, I found myself deeply conflicted about the film after experiencing the Reconstruction era segment in the film. Up to this point I had been doing fairly well at viewing the film as nothing more than a film. However, the Reconstruction section chipped away at my cool exterior to the point where it hit a raw nerve. The actors in blackface did not bother me as that was to be expected for the time. However, it was the way Griffith portrayed African-Americans that got under my skin. In Griffith’s eyes African-Americans were nothing more than savages who lacked any form of class or decorum.

Griffith depicted the African-Americans in the legislature as nothing more than a bunch of idiots who would throw their dirty feet up on the desk while passing laws to persecute the Caucasian population. To make matters worse, they wanted nothing more than to sleep with every Caucasian woman around. This is a lesson that a prominent abolitionist in the film learns the hard way when his daughter becomes the object of desire for a man he once tried to help. It was impossible for my anger not to swell with each passing frame. Which leaves me in somewhat of a conundrum. Do I view the film merely on its technical merit or do I consider the feelings it evoked in me? In most cases the answer would be both. Unfortunately in this particular circumstance both ideals are directly at odds with one another.

As a piece of propaganda, The Birth of a Nation is quite exceptionally. It is easy to see how this film became both a box office hit and a recruiting tool for the Ku Klux Klan. It is the blatant racism, not to mention the subsequent fear the film tries to evoke regarding the crushing of the “white south under the heel of the black south”, that is tough to stomach. So I stand here stuck on that proverbial fence not sure what side to land on. My mind argues for objectivity, but my gut seethes with anger. One thing I am sure of is that, almost 100 years after its release, The Birth of a Nation still has the ability to conjure up lasting emotions…which is quite a feat when you think about it.