The damaging impact that western wealth and arrogance has had on foreign lands is a wave that still ripples throughout history today. What is rarely discussed though is what, if any, atonement should be paid? For the central couple in John Michael McDonagh’s latest film The Forgiven, adapted from Lawrence Osborne’s novel, being accountable for one’s actions comes at a steep price.

After 12 years of marriage, David (Ralph Fiennes) and Jo (Jessica Chastain) display a level of distain that only comes from intimately knowing someone. Their conversations frequently devolve into sparing matches, with each verbal jab pointedly hitting below the belt. He views her as a tiresome nag, and she has no qualms calling out both the medical malpractice suit he is facing and his alcoholism. It is the latter that will forever change their union when a drunk driving accident, while vacationing in Morocco, leads to unexpected consequences.

Driving in the desert at night, on the way to a party at the lavish home of their old friend Richard (Matt Smith) and his partner Dally (Caleb Landry Jones), a bickering David and Jo hit Driss (Omar Ghazaoui), a young Arab man who stepped out in front of their vehicle hoping to sell them fossils. Shaken by the incident, the couple bank on the fact that the authorities will see it for the accident it was. However, when the Driss’ father Abdellah (Ismael Kanater) and his right-hand man Anouar (Saïd Taghmaoui) arrive at Richard’s home to remove the body, it becomes clear that this will not be easily swept under the rug. In fact, Abdellah requests that David accompanies him back to his village to observe the burial rituals.

It is here where The Forgiven splinters into two paths, each one messy and fascinating in there own way. One road follows David’s trip to the village and is immersed into a culture that is foreign to him. The other observes Jo reclaiming her freedom while enjoying the drunken debauchery occurring at Richard’s party. McDonagh uses both arcs to show both the oblivious arrogance of westerners, bored by their excess, and the linger pain their actions cause on the Arab community. 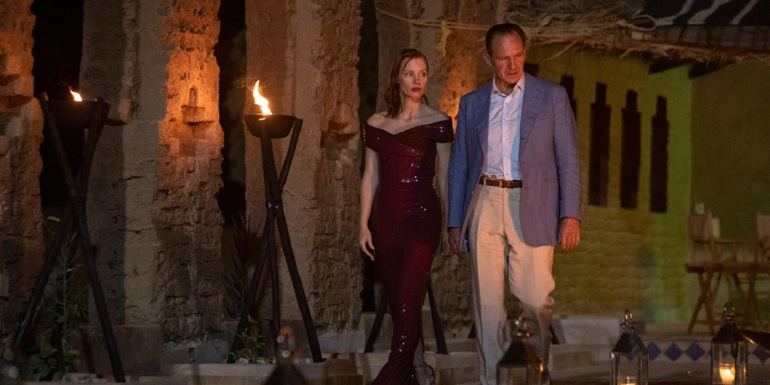 David initially assumes he can simply buy his way out of the situation. The thought of going to the village alone induces fear in him as he illogically thinks Abdellah might be part of the Taliban. He is not the only one to display an unjustified bias mind you. Even someone like Richard, who makes a point to highlight the hard work of his Muslim staff, is not as progressive when it comes to matters of race as he thinks he is.

The cold self-absorbed nature of the affluent within the film provide a compelling juxtaposition to the genuine emotion that David witnesses along his journey. In moving back and forth between the party and the village, McDonagh’s effectively captures the class divide in an intriguing way. One not only sees the impact of foreign wealth on Morocco from an Arab perspective, but also the frustration and economic struggles that the locals often endure. Like a brick thrown through a blacked out tinted window, hearing Driss’ name said aloud forces David and Jo, who frequently refer to him as “the boy”, to open their eyes to a reality both would rather not face.

While there are several powerful moments in the film, The Forgiven does not provide enough room for Jo’s own journey to be explored in a meaningful way. Her exploits at the party while David is way, including flirting with serial American womanizer Tom (Christopher Abbott), does not feel as liberating as the film intends.

In trying to balance the two arcs, McDonagh’s slow burn thriller struggles to find its footing whenever it veers away from David’s emotional awakening. However, in its messiness, there is still plenty to intellectually chew on in the film. There are no big dramatic speeches or overplayed emotions. Instead, The Forgiven offers a meditative look at what it means to truly see the “other” as human beings. It is much harder to ignore someone’s existence when you know their name and understand where they came from.