The death of Anthony Bourdain in 2018 hit like a dagger to the heart of his family, friends, and legion of fans. It is clear in Morgan Neville’s latest documentary, Roadrunner: A Film About Anothny Bourdain, that the wounds still have not healed for those who knew him best.

Getting to know Bourdain the man, rather than the celebrity, is at the core of Neville’s film. The director makes it clear early on that he wanted to make a film about why Bourdain was the way he was. However, how does one truly capture an individual as complex as Bourdain? After all he was a man who exuded a rugged carefree masculinity on the outside while simultaneously being meticulous about how his image was being crafted.

Neville’s documentary explores the contractions that both defined Bourdain’s persona and ultimately made him relatable on human level. In sifting through hours of archival footage, and speaking with family, friends, and co-workers, Roadrunner constructs an intriguing and complicated portrait of man who was many things to many people. Beginning with his seemingly meteoric rise to stardom after the release of his book Kitchen Confidential, his revealing memoir about life in the restaurant industry and battles with drug addiction, Neville shows that Bourdain’s ambition and drive was a recipe destined for success. 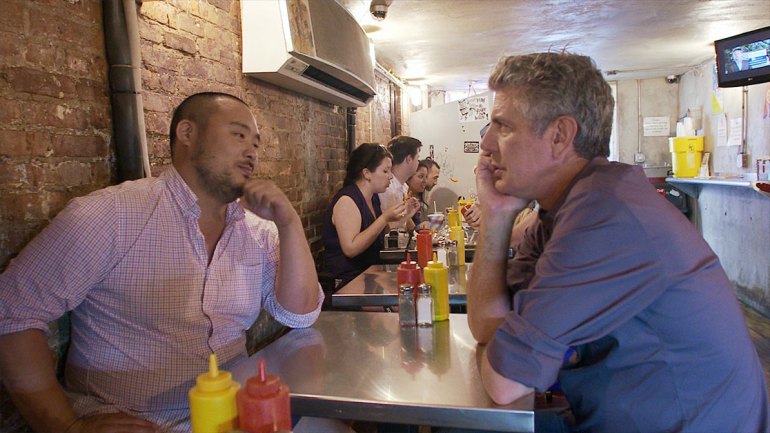 His celebrity status allowed Bourdain to become more than a culinary expert. He was an unlikely shepherd who ushered his flock of faithful fans into new terrains. Through his books and various television series, Bourdain opened the eyes of millions to various foods and cultures around the globe. He instilled a thirst for travel in his viewers while also using his platform to show the harsh realities of life for those from poorer countries outside of United States of America. As Neville’s documentary notes, it was impossible for a man like Bourdain to experience the world and not be changed by it.

While the unofficial travel journalist found a sense of solace when exploring the globe, he also lamented the fact that it took him away from his daughter. Furthermore, it did little to quell the demons that resided inside him. As one close friend points out in the documentary, Bourdain never dealt with his drug addiction from years earlier. He merely channeled his active personality into new obsessions, but they could only occupy him for so long before the dark thoughts crept in again.

It is that sense of darkness that Neville’s film, and those who knew the famed chef best, wrestle with the most throughout Roadrunner. Some of the most emotionally resonating moments arrive when those Neville speaks with attempt to unpack the mixture of anger and sadness they feel. The guilt they carry for not being able to do more to save Bourdain’s life is palpable. While the film and the interviewees ultimately want Bourdain to be remembered for all the good he has done, rather than the way his life ended, one cannot focus on his success without acknowledging the less than glowing moments as well.

Using Bourdain’s own words to give a sense that, even in death, he is the narrator of his own life, Neville’s film will no doubt please Bourdain’s dedicated fans. The documentary also serves as a solid introduction into Bourdain’s life for newcomers. Since Bourdain is such a complicated individual, Roadrunner lacks the cohesiveness it is searching for. However, it is the film’s imperfections that allow viewers to connect with its subject on a more personal level. In wrestling with the light and dark portions of Bourdain’s life Roadrunner: A Film About Anthony Bourdain manages to humanize a man who lived on his own terms.