In the world of revenge films there is an unwritten rule that you do not mess with a man’s beloved pet. If you kill a man’s dog or steal his beloved 4-legged companion, it is essentially a license for the victim to open a can of whoop ass on all those who stand in his way. One would assume that Michael Sarnoski’s Pig would be part of this illustrious canon of films based on its premise. A film about a reclusive truffle hunter returning to his past life in Portland in search of his kidnapped pig has all the makings of a violent thriller.

While Sarnoski’s film features a bloodied Nicolas Cage diving into the seedy underbelly of Portland, which includes an underground culinary Fight Club of sorts, the brief violence accentuates the drama rather than drives it. Pig is more concerned with how the characters navigate loss and identity in a world that has lost sight of what is important in life.

Throughout his life Robin Feld (Cage) has never forgotten about the people and places he has encountered. Once a giant in the Portland restaurant scene, the former chef spends his days as a truffle hunter in the Oregonian wilderness with only his trusty truffle pig to keep him company. Feld’s only contact with the outside world comes in the form of Amir (Alex Wolff), a slick entrepreneur who buys his truffles each week. However, when invaders break-in during the night and steal his pig, Feld will stop at nothing to get is pig back. 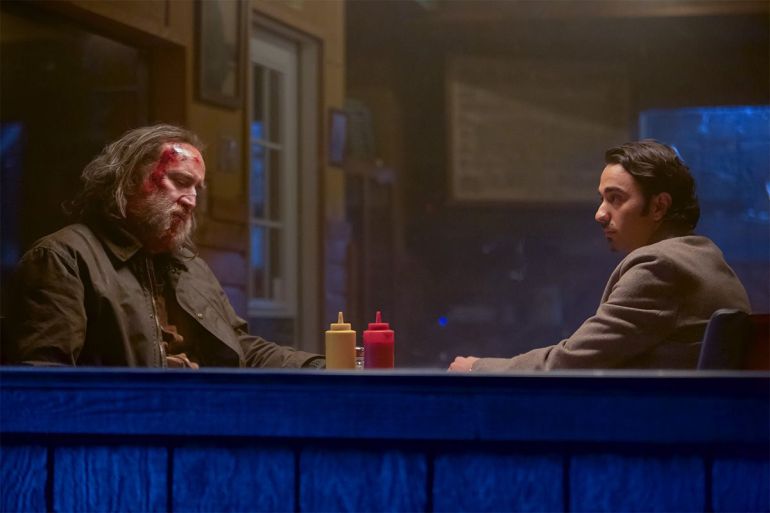 Enlisting Amir as his driver, the two men embark on a journey that will force them to reconcile with the pain of the past and the way capitalism has changed the face of Portland.

Feld and Amir are individuals who are at different stages of life, but they find common ground over the shared sense of loss. For Feld it was the thing that drove him into the woods, whereas Amir is trying to supress his conflicted feelings by trying to emulate his stern father’s (Adam Arkin) success in business. As they travel deep down the rabbit whole in search of the pig and observe the ways a man’s name and clout can be a form of currency in posh circles, it is their conversations about mortality and misplaced values that resonate the most.

By offering a more meditative approach to Feld’s quest, the film forces the viewer to reflect on the various masks they wear in their own lives. Feld may seem crazy at first, however, it becomes clear that he is not only the sanest person in the film, but also the most honest. In one blistering sequence Feld questions a former employee, Finway (David Knell), who is now the head at a fancy new-age restaurant, about the whereabouts of his pig without ever losing his gruff cool. Through his searing words Feld skillfully dismantles the cheerful façade the chef is trying to maintain. 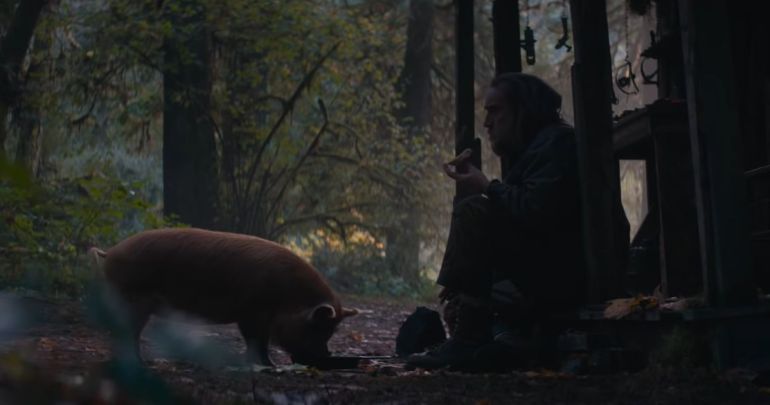 As if peering directly into Finway’s empty soul, which once held dreams that where authentic and bold, Feld quietly reminds him that “we don’t get a lot of things to really care about.” The powerful line hits like a knockout punch to the chef who can no longer deny that he has been living a lie. In chasing the approval of others, Finway, much like the city of Portland itself, can no longer recognize who he once was.

Sarnoski’s film takes great joy in taking jabs at the faux progressivism that has impacted every facet of life in Portland. It is a testament to the work of Sarnoski, Cage and Wolff that Pig works as well as it does. Cage and Wolff bring so much rich emotion to every scene, regardless of whether it is a quiet moment where Feld explains a persimmon tree to a little boy he meets or when Amir and Feld’s bond is forever cemented by cooking together. Cage is in fine form bringing a measured stillness to the role instead of his self-proclaimed “western kabuki” grandiose style of performance. The more reserved approach, and deadpan delivery, allows Cage to sell several of the comedic beats that lighten up the film’s seemingly bleak exterior.

Pig is a wonderfully layered film that lingers in one’s mind. It is the type of film where the tense climax does not revolve around violence, but rather a well-cooked meal. Pig is one of the most surprising films you will see this year.