In observing the picturesque beauty of the Italian seaside village of Portorosso, it easy to see why creatures of the sea would become enamoured with the region. There is a serenity to the town that is both alluring and sweet. It is the perfect setting for the imagination to flourish in Pixar’s latest film Luca.

A fish out of water coming-of-age tale, Luca follows a young sea monster, Luca (Jacob Tremblay), who lives a repressed life underwater. Despite being able to transform into human form when on land, the young sea creature has never raised his head above the water. Living with overly cautious parents Daniela (Maya Rudolph) and Lorenzo (Jim Gaffigan), and his easygoing grandmother (Sandy Martin), Luca has been raised to fear the above world. As his mother reiterates constantly, humans are killers who should be avoided.

Of course, his parent’s warnings cannot quell the sense of curiosity that stirs within him when he stumbles across human artifacts near his home. Discovering that the items belong to fellow sea monster named Alberto (Jack Dylan Grazer), a loner who frequently spends his time on land in an abandon castle column on the outskirts of Portorosso, Luca decides to take the plunge and venture above the water. Filled with a sense of danger and excitement that comes from tasting forbidden fruit, the young lad soon finds himself spending his days ashore playing with Alberto. Building makeshift Vespas out of scrap items, the duo bond while sharing a dream of one day exploring the globe.

Luca’s dreams of exploration are put in jeopardy when his parents find out about his daily dalliances on land. Fearful that his reckless antics could get him killed, his parents decide to send Luca to spend the summer with his uncle, a bottom feeder who lives in the darkest and most isolated part of the ocean. Unwilling to endure such a punishment, Luca convinces Alberto to runaway with him and venture within Portorosso for the first time. 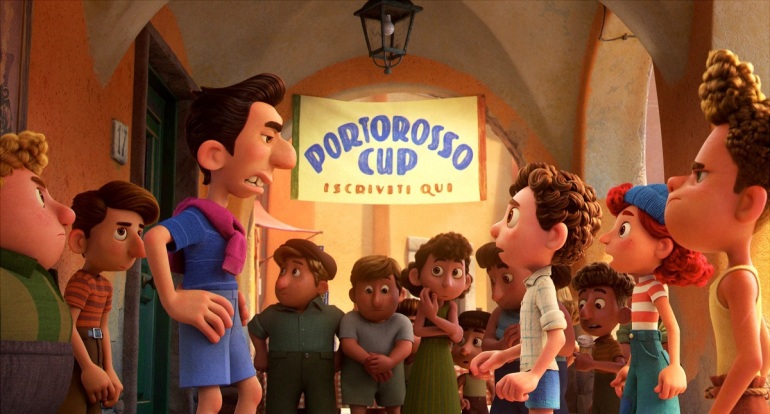 Attempting to assimilate with the locals, as they look like regular Italian kids, when water is not revealing their aqua-toned skin, the pair learn that the town’s annual competition the Portorosso Cup triathlon (swimming, pasta eating, bike riding) will be starting soon. With the prize money being enough to purchase a Vespa, the boys agree to team up with the spirited Giuilia (Emma Berman), the daughter of a fisherman (Marco Barricelli) who has had her fair share of failures in the competition, and immediately find themselves at odds with a local bully, and reigning cup champion, Ercole (Saverio Raimondo).

While the sense of adventure and discovery within the boys is palpable at times, the shine washes way as quickly as their human disguise in the rain. As charming as Luca is at times, the film is so enamoured with its lush European setting that it never delves past its surface level approach to the characters and the story. Young kids will eat up this film like a freshly dipped biscotti, but adults will be left with a rather disappointing aftertaste.

Part of the disappointment stems form the fact that Luca pays so many homages to other films that it struggles to find its own unique voice. Some of the film’s best moments come when Luca is embracing the limitless possibilities of his imagination, such soaring in a sky filled with stars that look like fish, which feels straight out of a Studio Ghibli film. While Studio Ghibli is a clear influence on director Enrico Casarosa’s work here, Luca never fully embraces the sense of world building and boundary pushing storytelling that make those films so iconic.

Furthermore, the film’s message regarding accepting those who are different gets rather murky by the end. Casarosa unintentionally makes acceptance something that is both transactional, by putting so much emphasis on the competition, and governed by a select few within the community. Being a Pixar film geared towards younger viewers, it is doubtful that the intended audience will think about the messaging with any great depth. Instead, they will be delighted by the sweet humour, colourful animation and one scene-stealing sassy cat. Still, as breezy as the film is, one cannot help but feel a little underwhelmed by this trip to Italy.