In the song “If It Wasn’t for Bad Luck” Ray Charles and Jimmy Lewis famously sang “If it wasn’t for bad luck, we would have no luck at all,” a line that could easily be the anthem for Craig Zobel’s The Hunt. Originally scheduled to be released last September, The Hunt was shelved due to internet uproar that reached all the way to the White House. Despite the fact no one had seen the film at that point, word had already spread amongst conservative circles on social media that the film glorified “liberal elites” hunting down Trump supporters.

While some would argue that controversy is good for business, it is a lot harder to generate positive interest in your product when the President himself is condemning your film on Twitter. By the time The Hunt finally hit theatres earlier this year, it had the unfortunate luck of being released the same weekend America began shutting down due to the COVID-19 pandemic. Even its recent Blu-ray and DVD release has been overshadowed by the social unrest caused by the death of George Floyd.

In some ways The Hunt essentially became the victim of the exact thing it was designed to comment on. A horror action hybrid, with plenty of dark comedic elements, the film is a satirical look at dangers of the misconceptions that social media routinely fosters. The premise is rather straightforward as a group of strangers are kidnapped only to wake up on the grounds of “The Manor.” Frequently discussed in conservative and conspiracy sections of the web, The Manor is a boogeyman of sorts, a place where liberal elites hunt and murder “deplorables” for fun. However, the game quickly gets turned upside down when Crystal (Betty Gilpin) seeks revenge on those who abducted her, including the mysterious Athena (Hilary Swank) who holds all the answers to The Hunt. 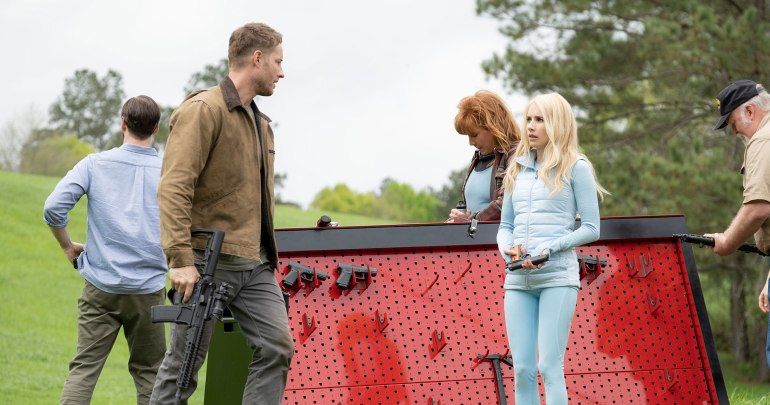 Despite having a rather ingenious premise, The Hunt does not capitalize on its full potential. The film had an opportunity to provide stinging satirical jabs at the misguided nature of modern liberalism. Starting off like a liberal version of The Purge, the film loses sight of itself in its attempts to skew “both sides” of the political debate. Unfortunately, em>The Hunt never spends enough time developing the characters for audience to care about who gets their comeuppance. Outside of Crystal, Gilpin is great as the slightly off-kilter heroine, every other character is defined by thin jokes related to political correctness, the deep state and immigration.

The Blu-ray only comes with three special features that expand on what the film was trying to achieve. “The Crafting the Hunt” featurette offers insight into how everything from the costumes to the use of red and blue colour palettes was designed to highlight the ideological misconceptions that exist within the film. For those taken by the film’s numerous action sequences, you will find “Athena vs. Crystal: Hunter and Hunted” interesting. The feature examines various elements that went into the climatic fight scene.

Although the film features some genuinely funny moments, many of which come with the characters unexpectedly meeting gruesome ends, The Hunt lacks that extra punch needed to make it a truly memorable thriller.