War is often portrayed through a romanticized lens. Countless films and books tell heroic stories of men and women who were willing to sacrifice themselves for the love of their country. What is often left out of these tales of valor is that, for many black soldiers, the war abroad was no different to the war at home. As Spike Lee’s Da 5 Bloods astutely notes, black soldiers endured multiple tours in Vietnam fighting a foreign enemy they had no personal issue with, while their own people needed liberating at home.

Adding salt to the physical and emotional wounds these black soldiers endured was the fact that their draft dodging white counterparts not only thrived, but one even wore his red “Make America Great Again” cap all the way to the White House. After spending years witnessing the country they fought for turn its back on them, one can understand why the four remaining survivors of the infantry known as Da Bloods would want to collect what they felt they were rightfully owed.

Returning back to Vietnam under the guise of bringing back the remains of their fallen brother and leader Norman “Stromin’ Norman’ Holloway (Chadwick Boseman), which is only partly true, Vietnam veterans Paul (Delroy Lindo), Otis (Clarke Peters), Eddie (Norm Lewis) and Melvin (Isiah Whitlock Jr.) have other aspirations in mind. Knowing that there is a trunk full of CIA gold buried in the jungle, the men plan to bring back the financial windfall they left behind. Hoping to launder the gold through a French businessman Desroche (Jean Reno), they aspire to finally fix the crummy hands that life has dealt them post-war. 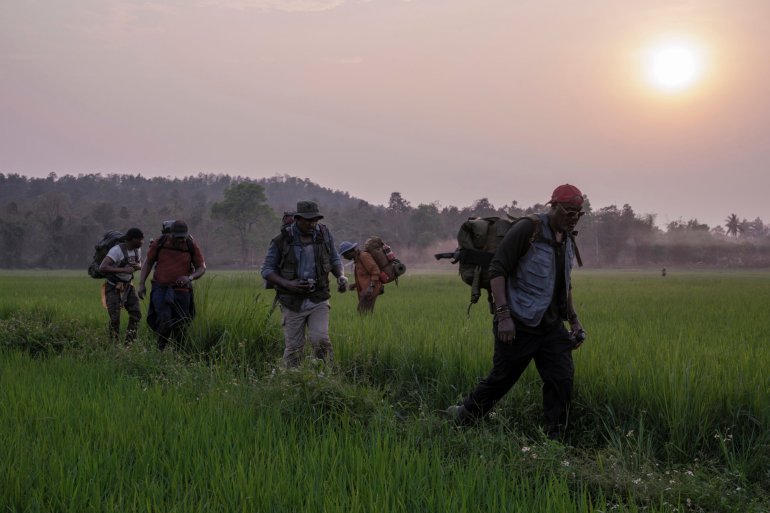 Secretly finding 17 million dollars in gold bars and smuggling it out of the country will be no easy feat though. A reality they must face almost instantly when Paul’s son David (Jonathan Majors) shows up in Vietnam worried about his father’s mental sate. Throw in the long standing tensions from the fallout of the war amongst the Vietnamese people, an unexpected encounter with an activist group working to defuse old landmines left behind, and some mysterious individuals also interested in locating the gold and you have the recipe for a volatile adventure.

Arguably Lee’s most ambitious film in years, Da 5 Bloods is a sprawling and mesmerizing work. It is a searing exploration of the devasting fallout of war. Lee touches on everything from the lasting physical and mental toll on veterans, the impact on Vietnamese bodies and families, and how the quest for profit over civil rights has left America in a perpetual state of social unrest.

Bookending the film with clips of Muhammad Ali and Martin Luther King Jr., both vocally opposed to the Vietnam War, Lee highlights how black bodies are often used to protect America despite not being treated as equals in the eyes of the country. The inclusion of a running gag involving the MAGA hat that Paul wears, he is the only member of Da Bloods who is a Trump supporter, is further emphasis of this. While Lee has never been one to hold back his political punches, the blistering social and political commentary in Da 5 Bloods adds additional layers to the film’s powerful observations on the weight of trauma and guilt that those who experience war must carry. 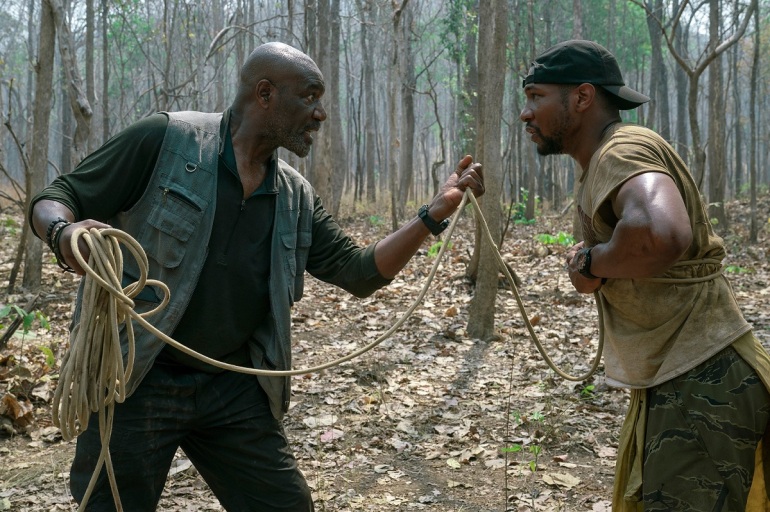 The theme of lingering guilt and the madness that war can bring is perfectly encapsulated in Delory Lindo’s remarkable performance as Paul. Haunted by ghosts he cannot shake, Paul is a man whose war never really ended. Lindo’s character not only embodies the paranoia that comes with PTSD, but his eyes masterfully convey the unshakable sadness and rage that war has shackled to him. Lindo’s work is elevated by the strong turns by the rest of the cast who all bring unique layers to their characters. Peters and Majors are especially good at providing the film with heart and hope even in its bleakest moments.

If there is one minor quibble to be had with Da 5 Bloods it is that the film covers more ground than it can handle. Just as the men must navigate the jungle, Lee asks the audience to reflect on PTSD; systemic racism in America; the anti-black racism that American soldiers taught others abroad; international families who profited off of the Vietnam War; the modern opioid epidemic; racially driven financial disparity; veteran’s inability to truly connect with loved ones after returning home from war and so much more. Fortunately, it is a testament to Lee’s masterful direction that, despite all these themes, the film still manages to flow effortlessly.

Supported by the wonderful cinematography work by Newton Thomas Sigel, which takes one from the vibrant neon drenched clubs to the lush rivers that usher the men to their inevitable descent, Da 5 Bloods is an unforgettable and thought-provoking experience. As the film exquisitely shows by having the actors play their younger selves in flashbacks, the times may have changed but the trauma and injustice remain. Da 5 Bloods creates new cinematic heroes in individuals like Stormin Norman and the rest of his bloods. However, as with most black veterans, their skin colour does not afford them the same freedoms that they were sent to fight for.