Director Mirrah Foulkes takes the traditionally violent slapstick of the Punch and Judy puppet play and turns it on its head in a female-driven, darkly funny fable Judy & Punch.

Judy (Mia Wasikowska) is married to Punch (Damon Herriman). They both perform in their traveling Punch and Judy show, amazing towns everywhere with their puppetry and spectacle. The only problem is that Punch is a hopeless drunk, womanizer, and a bully. While Punch basks in the glory, Judy is the real brains of the operation. Punch is so unreliable that his reckless actions results in the accidental death of their infant daughter who he was left in charge of caring for while Judy was out.

Before she can even properly grieve the devastating loss, a nasty row with Punch results in Judy being beaten to death. Laying the blame for his crimes on the estate’s elderly servants, and living in a town that attends public stonings with glee, Punch manipulates the vile townsfolk into believing his versions of events. He expects the town to hang the servants for their supposed sins, but the emergence of a mysterious child, Scotty (Daisy Axon), with street smarts and a simple act of kindness unexpectedly changes the game. 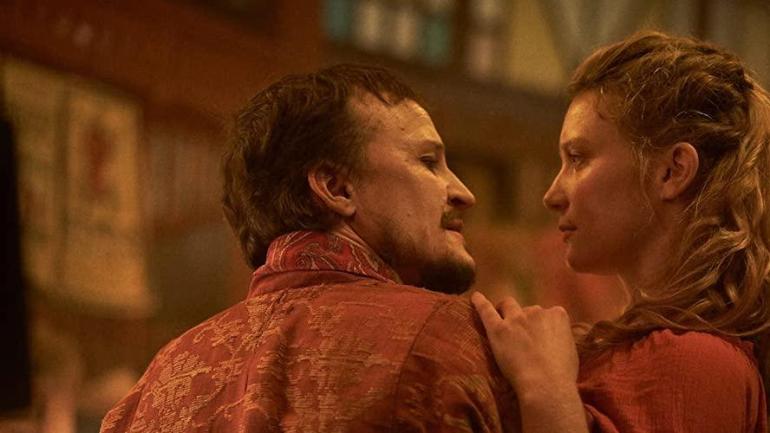 Foulkes took a traditional story and transformed it into an underdog feminist saga with a powerful message about abuse. She includes witch hunts, scheming villains, and a camp of outcasts who defy the oppressive will of the town.

Judy & Punch neatly infuses historical details within the film – for instance, Judy and Punch use marionettes which were the first incarnation of the famous puppets hailing from Italy. The inclusion of a dog named Toby, a nod the real Punch and Judy shows, and the disheveled aesthetics of the townsfolks provides the 17th century setting with an authentic feel.

The comedy is quite dark, so be prepared to laugh at moments that are also disturbing. Wasikowska is always a pleasure to watch and makes us care for Judy even when tolerating Punch and his awful ways. Axon is also engaging as the wise beyond her years Scotty, she brings a unique and refreshing energy to the film. The scoring by François Tétaz blends classical music with electronics, dark strings and vocals, and acoustic versions of modern songs that are surprisingly enjoyable and pulls the film together.

Morality, empowerment, and just deserts are the names of the game in this clever fairy tale. If you’re a fan of Yorgos Lanthimos’ The Lobster, you’ll enjoy the uncomfortable comedy of Judy & Punch.