It has been a long, and at times bumpy ride, but the Skywalker saga has finally come to an end. Fortunately for fans of the franchise, the force will be with them always as J.J. Abrams’ Star Wars: The Rise of Skywalker, the final chapter to the epic Star Wars franchise, arrives on Blu-ray and DVD tomorrow. While the film itself is a rather mixed affair, the Blu-ray is filled with tons of bonus content to satisfy even the most casual of Star Wars fans.

After a mysterious radio transmission featuring the voice of Emperor Palpatine (Ian McDiarmid), believed to be dead, is heard across the galaxy, Rey (Daisy Ridley), Poe (Oscar Isaac) and Finn (John Boyega), set out to uncover the origins of the message. The trio, along with friends Chewbacca (Joonas Suotamo), C-3PO (Anthony Daniels) and BB-8, race to locate a rare Sith tracking device that will possibly lead them to the Emperor. However, Kylo Ren (Adam Driver) is on his own fact-finding mission, one that will have him not only confronting his connection to Rey, but also expose the true power of the dark side. 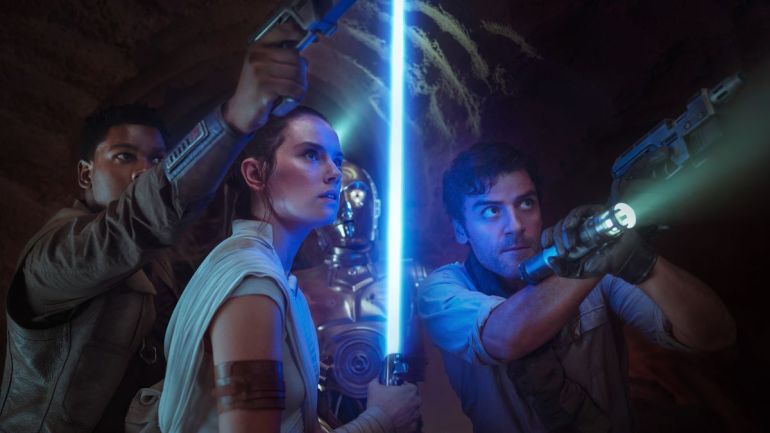 Equally thrilling and perplexing, Star Wars: The Rise of Skywalker struggles to find the right balance between the nostalgia of The Force Awakens and the brilliant new roads Rian Johnson’s The Last Jedi boldly paved. The film feels like a greatest hits of lightsaber fights, chase scenes and intergalactic dogfights.

While the film does entertain on a certain level, it is using the standard Star Wars formula after all, The Rise of Skywalker is the weakest film of the latest trilogy. There is a lot that occurs in the film that feels confused and rushed. As strange as some of the leaps in logic are, the film does introduce some charming new characters like scoundrel Zorii Bliss (Keri Russell), freedom fighter Jannah (Naomi Ackie) and droidsmith Babu Frik (voiced by Shirley Henderson), the latter of whom lights up ever scene he is in. There is also the return of General Lando Calrissian (Billy Dee Williams) to the Star Wars fold which will bring a smile to the face of many. However, these additions come at the sacrifice of Rose Tico (Kelly Marie Tran), who is sadly pushed to the sidelines; and the awkward and stunted Rey and Kylo arc.

Thankfully the Blu-ray is filled with a slew of bonus materials that helps to fill in the blanks for what Abrams and crew intended for the film. The best of which is the stunning feature-length documentary “The Skywalker Legacy.” A riveting and detailed examination of The Rise of Skywalker, this documentary offers both a trip down Star Wars memory lane and thoughtful insight into every aspect of the final chapter’s production. Everything from utilizing unused footage of Carrie Fisher to the joys and challenges of the Jordanian shooting locations to the important work of stunt coordinator Eunice Huthart to Anthony Daniels time as C-3PO and much more is explored.

A perfect blend of information and nostalgia, “The Skywalker Legacy” is endlessly fascinating. One can argue that the disc is worth getting for the documentary alone. Another great feature is “Pasaana Pursuit: Creating the Speeder Chase” which details how second unit stunt team lead by director Victoria Mahoney, the visual effects crew and numerous others brought the thrilling landspeeder chase sequence to life.

Star Wars: The Rise of Skywalker is a complicated blend of contradictions. It lacks the balance it desperately seeks as it entertains and disappoints with equal measure. However, the bonus content alone makes the Blu-ray a solid edition for those looking to complete their Star Wars collection.

Bonus Features: The Skywalker Legacy, Pasaana Pursuit: Creating the Speeder Chase, Aliens in the Desert, D-O: Key to the Past, Warwick & Son, Cast of Creatures