Star Wars: The Rise of Skywalker may be a tale of identity and faith but it is a film that lacks both. The film is so concerned with quelling the unjust online vitriol that The Last Jedi received that it loses sight of its own distinct vision. Much like Rey’s quest to understand who she is, the film struggles to find the right balance between the nostalgia that J.J. Abrams’ The Force Awakens cruised on and the brilliant new roads Rian Johnson’s The Last Jedi boldly paved.

Abrams clearly wants The Rise of Skywalker to be yet another trip down memory lane. It does not trust that audiences can handle the franchise moving towards the future, so it cements itself in the past. The film feels like a greatest hits album of lightsaber fights, space dogfights, and planet destroying weapons, but performed by a younger band.

The fascinating thing about the film though is that its best moments arrive when it builds on the work that The Last Jedi put in. Johnson’s film not only allows Abrams to investigate the real powers of the Jedi, but also explore the dark side of the force as well.

One of the annoying things about the Star Wars prequels was that they introduced audiences to several powerful Jedis who spent most of their time sitting around in a conference room. They talked a big game about the power of the force, which flows through all who open their minds to it; but could not detect the uber villain in their midst. It was just accepted that the dark side is so blindingly seductive and powerful that even Jedi Masters do not understand it.

Those enabling the dark side of the force are who Rey (Daisy Ridley), Poe (Oscar Isaac) and Finn (John Boyega), set out to find when a mysterious radio transmission with the voice of Emperor Palpatine (Ian McDiarmid), believed to be dead, is heard across the galaxy. Determined to uncover who is behind the message, the trio along with Chewbacca (Joonas Suotamo), C-3PO and BB-8 race to locate a rare Sith tracking device that will lead them to the source of the transmission. However, they are not the only ones searching for the Emperor. Kylo Ren (Adam Driver) is on his own fact-finding mission as he wants to ensure nothing threatens his placement atop the evil ladder.

Along the way Rey, who is continuing to train as a Jedi, must confront the full extent of her abilities; as well as the complexities that comes from the evolving force-based link she has with Kylo Ren.

While the film does entertain on a certain level, it is using the standard Star Wars formula after all, The Rise of Skywalker is easily the weakest film in this recent trilogy. There is a lot that occurs in the film, which won’t be spoiled here, that feels confused and rushed.

Considering the extensive nature of the evil plot that is bubbling under the surface, it is baffling that so many characters would be unaware of what is really occurring. The sequences involving Emperor Palpatine, while the closest the film gets to the stunning visual flare of The Last Jedi, further emphasize this. 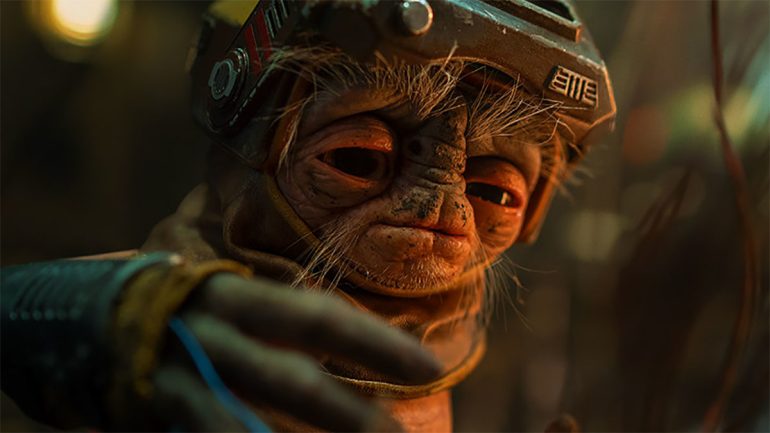 As big as the leaps in logic are, the film does introduce some charming new characters like scoundrel Zorii Bliss (Keri Russell), freedom fighter Jannah (Naomi Ackie) and droidsmith Babu Frik, who are destined to be on the list of fan favourite side characters. There is also the return of General Lando Calrissian (Billy Dee Williams) to the Star Wars fold which will bring a smile to the face of many. However, these additions come at the sacrifice of Rose Tico (Kelly Marie Tran), who is sadly pushed to the sidelines; and the awkward and stunted Rey and Kylo arc.

Part of the problem is that the film spends too much time trying retrofit a group dynamic that did not previously exist.

Just as the Harry Potter franchise kept the focus on the principal three (Harry, Hermione and Ron) as they searched for horcruxes. Abrams really tries to force-feed the bond between Rey, Poe and Finn. He desperately wants them to be the new Luke, Han and Lelia, rather than their own unique entity. Unfortunately, the film struggles to keep them together long enough to make this happen. Every mission involves them splitting up or Rey leaving them after sensing something in the distance. Furthermore, Rey and Poe only officially met at the end of The Last Jedi, so their interactions never develop naturally.

Star Wars: The Rise of Skywalker is a complicated blend of contradictions. It lacks the balance it desperately seeks as it entertains and disappoints with equal measure.