The Back to the Future series immortalised the DeLorean, a car bearing the name of its creator and the subject of Framing John DeLorean. The man behind the car was, to put it lightly, a very interesting character. As a young engineer John DeLorean worked his way into General Motors and quickly carved out a name for himself. He made a massive statement by sneakily finding a loophole to put a giant engine under the hood of a Pontiac.

With big ideas that paid off, he worked his way up the corporate ladder but eventually realised that he didn’t want to push papers. He passed on the chance to be the President of General Motors in order to build his own car company. A company whose first product would be a vehicle of his own design: the iconic DeLorean.

It is how he went about achieving this feat that is the most fascinating part of his story. To say John DeLorean’s life was unique is an understatement; it consisted of a supermodel wife, dodgy business dealings, offshore bank accounts, cocaine, and undercover FBI agents. 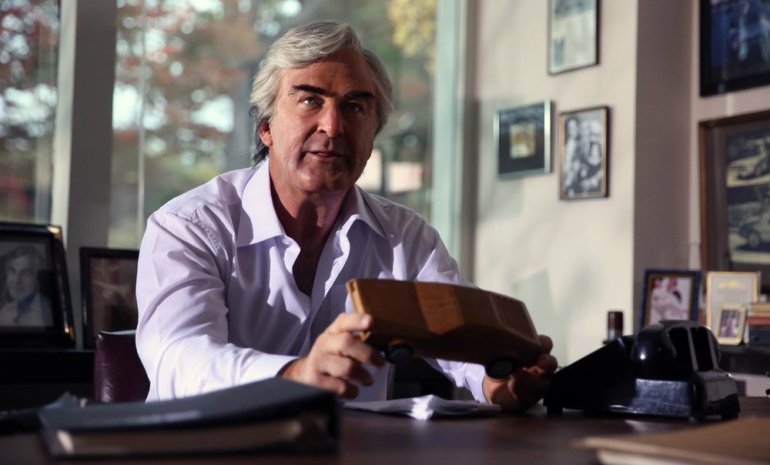 His story is amazing and, as said in the film, perhaps too many times, it is surprising that a biopic hasn’t been made of him. However, the decision to use re-enactments ruins the film. Casting Alec Baldwin to play DeLorean, directors Don Argott and Sheena M. Joyce make a rather strange choice of often interviewing Baldwin about the renegade visionary as the actor’s makeup is being applied. It is Baldwin and DeLorean historian Tamir Ardon who make up most of the talking heads segments in the film.

The inclusion of Ardon makes perfect sense, but Baldwin not so much. He isn’t connected to the car and doesn’t have the personal history to speak with authority about the subject. All he can offer are his opinions. He also presents ideas for a potential film that are often cringe-worthy.

What could have been a trim 90-minute documentary feels bloated. More focus on DeLorean’s children, who have shockingly few scenes, would also had made more sense than the Baldwin interviews. Their input, as well as those who worked with DeLorean over the years, deserved more screen time than the re-enactments.

Framing John DeLorean is a documentary that feels like a plea for a dramatic biopic to be made. The documentary’s stylistic choices ultimately distract from John DeLorean’s story and the fallout of his actions.