Let us all have a moment of silence for dearly departed dark and brooding DC Extended Universe. It will not be missed. Okay, I might be jumping the gun a bit as there is still a slew of DC films coming down the pipe, including Todd Phillips’ Joker which looks deliciously disturbing. However, if Wonder Woman, Aquaman and now Shazam! are a sign of things to come, then the future might look bright after all for the DCEU.

No longer wanting to be the edgy kid who smokes in the school parking lot while everyone else enjoys the pep rally, the DCEU is finally showing it can join in on the fun as well.

In many ways Shazam! feels like the DCEU’s answer to Guardians of the Galaxy – which is still one of the most unabashedly fun films in the Marvel Cinematic Universe. Both films use a healthy dose of comedic pratfalls to convey messages of family and togetherness. They also revolve around heroes whose childhood traumas, related to their parents, causes them to grow up to be loners who place higher value on items (e.g. tape recorder, compass) than other people. It is through the support of a diverse group of individuals that the hero learns family is not about blood ties, but rather the people you feel most at home with. 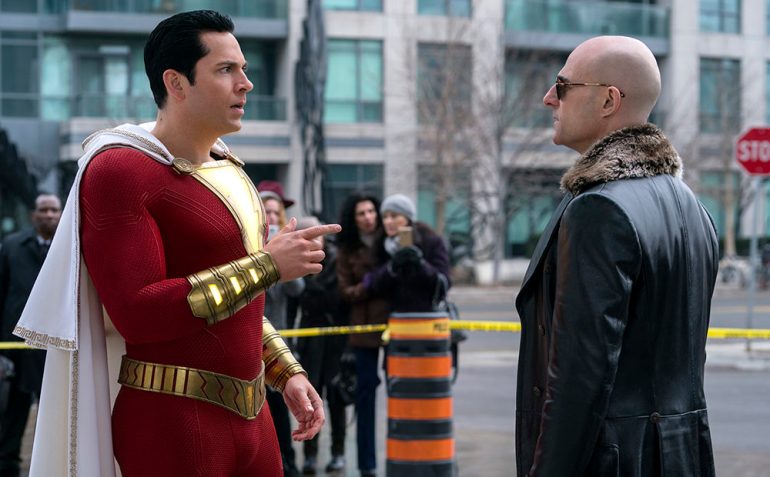 Where Shazam! differs is in its exploration of how we are not defined by the sins of our parents, but rather choices we make. As young children Billy Batson (Asher Angel) and Dr. Thaddeus Sivana (Mark Strong) experienced trauma directly related to their parents. Each were forced to carry the weight of disappointment for not living up to a certain ideal. For Batson it is feeling at fault for getting separated from his mom, and for Sivana it was the shame of not feeling he was “man enough” to meet his father’s expectations.

Despite being decades apart they each have childhood experiences with The Wizard Shazam (Djimon Hounsou) who tests each of them to see who is worthy of the magic that can save the world from devastating evil. However, it is the seemingly average Batson, and not the privileged Sivana, who is bestowed the power of the seven legends which make up the buffed champion known as Shazam (Zachary Levi). While Sivana goes on to spend his adult life searching for the wizard’s power and ends up making a sinister pact with the dark magic of the Seven Deadly Sins, Batson’s magical endeavours are more of the monetary variety.

As one would expect from a 14-year-old who as the ability to become an adult with superpowers, Batson indulges in the most juvenile activities in order to learn the limits of his powers. Assisted by new foster brother Freddy Freeman (Jack Dylan Grazer), who lives with a disability, Batson makes viral videos and does parlor tricks in public to make quick cash. Of course, it is only a matter of time before Batson realizes that there are consequences to having great power. When Sivana’s thirst for supremacy leads him to Batson’s foster family, the young lad must decide what it really means to be a hero.

Bursting with humour, both silly and at times risqué, David F. Sandberg’s film is a pure delight. It takes its own path free of the burden of setting up other DCEU films. For a film that exist in a world where the members of the Justice League are household names, Shazam! manages to keep the notion of family at the forefront.

The attention to family creates an entertaining superhero film that genuinely empowers young people. Though Shazam may have the physique of an adult, Levy’s delightful performance consistently reminds the audience that the weight of the world is on the shoulders of a teenager.

Many of the best moments in the film have very little to do with Shazam’s powers, but rather Batson’s interactions with Freeman. The beating heart of the film, Sandberg allows the brotherly relationship between the teens to breath and grow organically. The boy’s relationship also provides an accessible entry point into Batson’s diverse and charming foster family. A family who takes their bond to a whole new entertaining level by the end of the film.

Never taking itself too seriously, this is a film worth yelling SHAZAM! about.