Mediocrity is the worst quality one can find in art. Greatness is greatness, and garbage can allow for unintentional humor and certain varieties of the bizarre that greatness cannot. The blandly competent is, therefore, the least inspiring of all artistic modes. The new Stephen King adaptation, Pet Sematary, dutifully treads the path of mediocrity with frustratingly short detours into art or trash.

We open with a direct quotation of the opening shot of the most revered of all King adaptations, The Shining. For a few short moments, we are offered the possibility that the makers of Pet Sematary will attempt something as hauntingly unconventional as the Kubrick film. Alas, it’s a bait and switch. The film’s main characters, Louis and Rachel Creed (Jason Clarke and Amy Seimetz) move to a farmhouse in Maine. Their daughter, Ellie (Jeté Laurence), is one of those insufferably wholesome movie children, so of course she loves her cat, Winston Churchill, who she calls “Church” for short. Why someone in this family would name their cat after the prime minister (Does the family have British heritage that they take pride in? Is little Ellie particularly interested in the Second World War?) is an unanswered question more interesting than anything in the film.

Church is hit by a truck, but Louis doesn’t have the heart to tell Ellie. Lucky for him, the Indian burial ground behind his house is cursed and causes dead things buried in it to come back to life – but twisted! Next to this cursed burial ground is a pet cemetery that local children created for their pets that were claimed by the highway. The kids misspelled “cemetery” on the sign they made for it, a filmmaking choice which has no impact on the story but ensures that every author who reviews this film must explain that they actually spelled its title correctly. 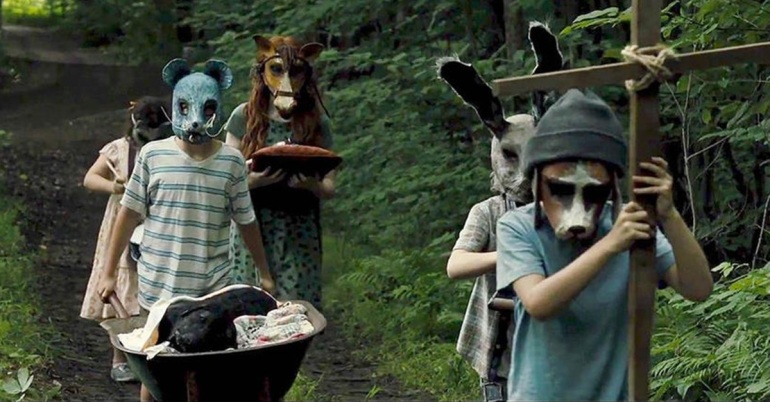 Because having a zombie cat is somehow preferable to telling his daughter that her kitty died, Louis starts digging and Church comes back to life, but is extremely aggressive. The task of making a common house cat scary takes more talent that the filmmakers display. Church scratches, bites, and snarls, but his furry malevolence feels less like horror and more like slapstick. Louis tries to put him down, yet, he is apparently too kind to exterminate a demon spawn of hell, so he drives the undead feline far away from his house and leaves him in the woods. The cat comes home, unintentionally echoing a famous episode of Seinfeld. Ellie goes to meet her cat in the street and gets run over by a truck in a slow-motion sequence that aims to be operatically sad but succeeds at being melodramatically hilarious.

Who knew that having a yard directly adjacent to a highway is a bad move when you have small kids? If you can’t see where this film is going with the dearly departed Ellie and that Indian burial ground, Pet Sematary will hold plenty of shocks and surprises for you – the rest of us will be left wanting.

Pet Sematary works best during its quieter moments, when a Gothic ambiance is allowed to take hold, but too frequently the film uses clichéd jump scares. Pet Sematary is a zombie film, but as a work of art, it’s less akin to a classic zombie and closer in spirit to Frankenstein’s monster – it’s composed of bits and pieces of better horror stories from “The Monkey’s Paw” to Night of the Living Dead to The Exorcist. Like the family cat, these tales have been brought back to life, but in a much diminished form.

View all posts by Matthew Trzcinski