There is a moment within Captain Marvel, the latest chapter in the never-ending Marvel Cinematic Universe (MCU) saga, where the film’s heroine Carol Danvers (Brie Larson) begins to realize her full potential. Reflecting on the individuals, the majority of which are men, who have doubted her or held her back she confidently proclaims she “has been fighting with one hand behind her back.” One cannot help but wonder if the remark applies to the film’s script as well.

As Marvel’s first female led film, Captain Marvel is equally empowering and frustrating. It is an origin story that is burdened with not only establishing a new hero, but also retroactively giving birth to the MCU as we know it. A tall task that the film has fun attempting to juggle, even if the balls in the air are not of equal weight.

Taking place in 1995, during a volatile intergalactic war between the Kree and the shapeshifting race known as the Skrull, we meet Danvers as she is struggling to remember pieces of her life prior to six years ago. Haunted by dreams of a past life, Danvers spends her time training with her mentor Yon-Rogg (Jude Law) in hopes that the Supreme Intelligence, an artificial being who is ruler of the Kree, will one day deem her ready to join the fight. 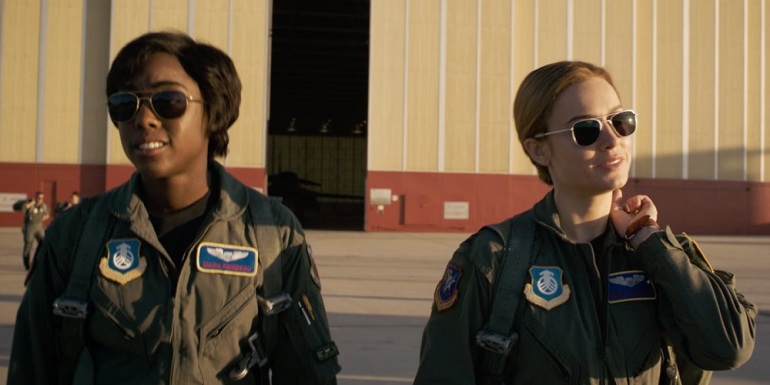 Her first mission, a rescue operation led by Yon-Rogg, quickly goes south as the team is ambushed and Danvers is captured by Skrull commander Talos (Ben Mendelsohn). While the enemy probes her mind in hopes of locating U.S. Air Force pilot Dr. Wendy Lawson (Annette Bening), Danvers manages to escape and winds up crashing landing on Earth. It is there were she meets and partners up with S.H.I.E.L.D agent Nick Fury (Samuel L. Jackson) to locate both the Skrulls who have infiltrated the planet and the powerful weapon they are seeking.

Using the weapon of mass destruction narrative to open a greater conversation about the ways people are easily indoctrinated into certain ideals, Captain Marvel is about breaking the chains that hold us down. In the film Danvers must not only learn to free herself from physical bonds, but societal ones as well. Like a flag bearer in a gender equality march, the film confidently confronts the numerous ways that females are told to stay in their lane and keep their emotions at bay.

Whether it is the harassment of men wanting them to smile more, or how women are often bullied out of traditionally male dominated fields, the film confidently empowers females young and old to reclaim their space and identity. This is best captured in the scenes where Danvers discovers she not only spent time on earth, but she is also best friends with fellow U.S. Air Forces pilot Maria Rambeau (Lashana Lynch). Rambeau, who is the mother of intelligent 11-Year-old Monica (Akira Akbar), is portrayed as more than the black sidekick who is meant to give Danvers a much-needed pep talk. Both Rambeau and her daughter are fully realized characters. When Rambeau agrees to help Danvers, one gets the sense that she can more than hold her own despite not having superpowers. 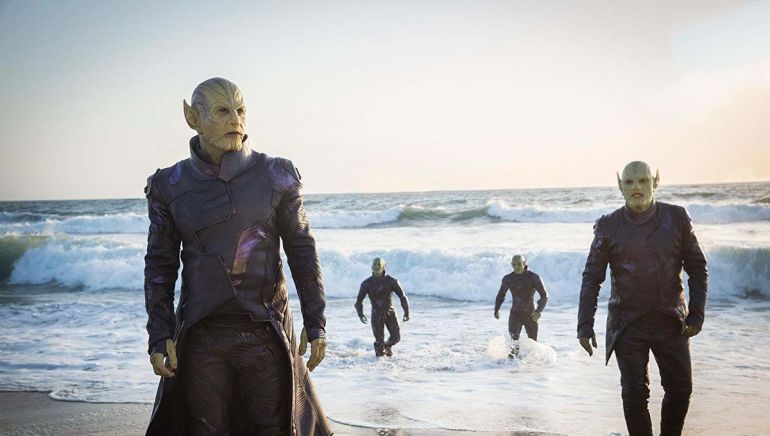 Despite the empowering message that flows throughout, Captain Marvel cannot figure out how to overcome the pitfalls that come with being part of the MCU. Now 21 MCU films in, let that number sink in for a moment, it is stunning that Marvel Studios still has not figured out how to consistently make compelling foes for their heroes to face. This is especially apparent in this film when observing the disjointed way that the plot unfolds.

The first act feebly attempts to give a crib notes version of the Kree-Skrull war. However, it does not provide enough insight for one to get fully invested in the plight of either side. When the narrative takes a sharp turn, and Danvers must decipher truth versus fiction, the emotional beats feel as predictable as the generic villains she must face. A point further emphasized when the film briefly, and awkwardly, pivots to an even greater baddie, who fans of the MCU will recognize.

Fortunately, being a part of the proven Marvel formula, Captain Marvel is filled with enough fun moments to help keep the film moving. Directors Anna Boden and Ryan Fleck ensure that the chemistry between Danvers, Fury, and Rambeau feels more natural than the special effects that attempt to make Fury look decades younger. While the action scenes are not as thrilling as they could have been, Boden and Fleck infuse each set piece with plenty of humour. Of course, the real scene-stealer of the film is Danvers cat Goose, who generates some of the biggest laughs in the film.

While the film does not carry the sense of gravitas that a hero like this deserves, it’s merely “fine” by MCU standards, Captain Marvel is effective enough in introducing a hero who we could all draw strength from.