There are several great Canadian short films playing Sundance, take For Nonna Anna and I Like Girls for example, that we recommend you seek out see if you happen to be attending the festival. Along with I Like Girls, The National Film Board of Canada (NFB) has two other delightful short films screening at Sundance that are well worth your time. 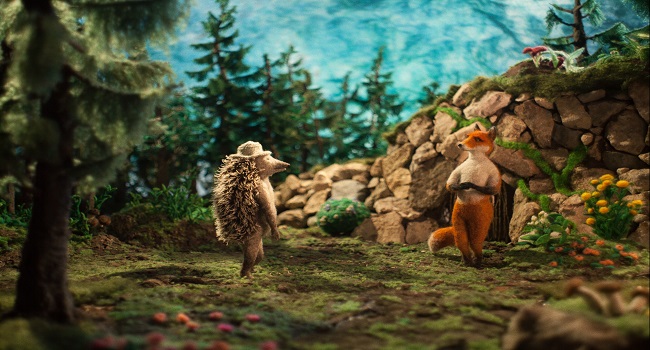 Hedgehog’s Home is a wonderful film from director Eva Cvijanović set in a forest inhabited by various animals including the titular Hedgehog. While respected by his four legged peers, Hedgehog’s unwavering love of his modest home stirs up mockery from four beasts (Fox, Wolf, Bear and Wild Boar) in particular.

Using stop motion animation, and featuring dialogue in rhyming couplets, Cvijanović presents a vibrant commentary on the dangerous nature of excess. Much like the four other creatures who taunt Hedgehog, we have become a society increasingly obsessed with the superficial aspects of life. Hedgehog’s Home is a humorous and immensely charming film that reminds us that the key to a good life is appreciating what you have rather than being blinded by what you want.

As his 33rd birthday approaches, Manivald’s life has settled into a comfortable routine. Living with his retired mother, he spends a good portion of time playing the piano and being a rather dutiful son. This simple life is complicated with the arrival of a handsome wolf named Toomas, who had come to fix the family’s broken washing machine. Toomas’ presence ignites passionate feelings within both the fox and his mother, setting up a rather complicated dynamic between mother and son.

Manivald is an intriguing tale of sexual awakening, albeit one that occurs much later in life, that takes and amusing and bittersweet look at the complexities of love. Director Chintis Lundgren slyly uses humour to navigate the intricate emotions that both Manivald and his mother are forced to confront over the course of the short film. As the audience follows Manivald on his journey towards independence, in one amusing shot he reads a book on “How to Win Friends and Influence People”, the audience cannot help but knowingly nod as he deal with the joys and heartbreaks that comes with life.