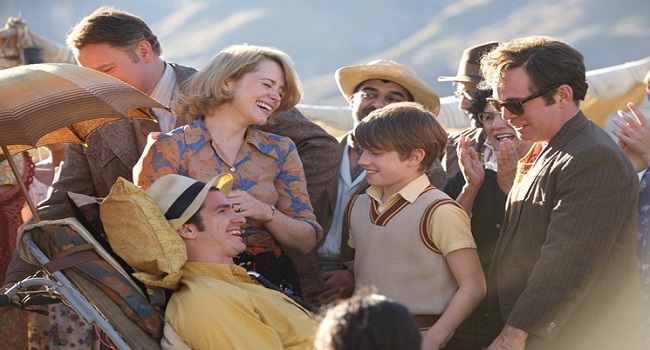 Andy Serkis makes his directorial debut with Breathe, which is now available on DVD & Digital Copy combo packs courtesy of Elevation Pictures. It is a tale of love and courage in the face of adversity. The film focuses on Robin and Diana Cavendish (Andrew Garfield and Claire Foy), a couple whose lives were altered when Robin, an activist and inventor, was diagnosed with polio and left paralyzed from the neck down.

Dependent on a respirator, and with his wife pregnant at the time, life looked very bleak for the once adventurous man. Unwilling to give up on her husband, or let him give up on himself, Diana’s support would propel Robin to commence a fight against the societal notion that people with disabilities are best suited to remain tucked away in hospitals. In his pursuits to show that those with living with disabilities can live a normal life, he helped to spearhead inventions, including wheelchairs with built-in respirators and hydraulic lift for vans, that ended up bringing power and dignity to many around the globe.

Structured like a classic love story, complete with sweeping landscapes and an overly sweet orchestral score, it is exactly what you expect from a period piece biopic. While the film does tend to play it safe, Serkis shows much promise as a filmmaker. He clearly knows how to pull strong performances from his ensemble cast. While Garfield is solid in the lead, Foy is the revelation here. She brings an emotional depth that makes the couple’s plight palpable.

The extras on the DVD are sparse, not even a director’s commentary from Serkis, with only two featurettes. Both are of the “blink and you’ll miss it” variety, but at least the “Getting into Character” feature has Cavendish’s real-life son offering a few words on Andrew Garfield becoming his father right down to his voice.

Breathe is not an edgy film by an means, though it is more engaging and less manipulative than The Theory of Everything, but it does offer a pleasant experience that will have you eager to see what Serkis directs next.

Special Features:
Story
Getting into Character