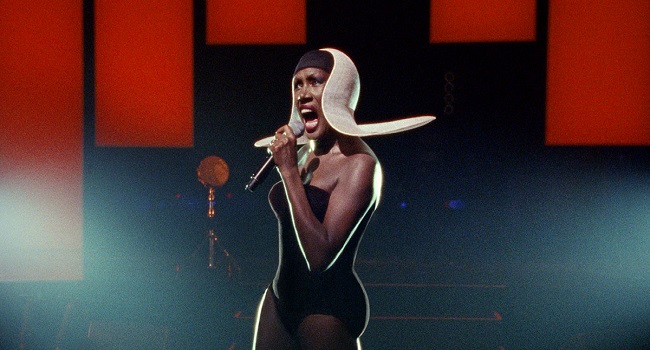 Grace Jones’ lengthy career has spanned the worlds of music, fashion and acting, so it is somewhat surprising that no one thought to make a film about her life until now. Thankfully Sophie Fiennes’ new film Grace Jones: Bloodlight and Bami is here to fill that void. Taking an unconventional approach, the film forgoes the standard talking heads structure, Fiennes’ camera offers a fly on the wall look at Jones’ busy life. Following the New Wave icon as she travels to Jamaica to reconnect with family and record a new album, as well as documenting the globetrotting concert tour she goes on, the unprecedent access Fiennes gets allows the audience to feel like a close confidant to Jones, witnessing all the ups and downs.

Due to the film’s construction, much of Jones’ past is unveiled through causal discussions with her family members in Jamaica and the personal songs she performs in concert. When she yells “I am human, man. I am human” to a recording studio manager who is giving her the runaround, Fiennes’ film effectively backs this up by showing that, behind the tough exterior, Jones is simply a passionate artist and mother who merely wants the best for both her career and her family.

While Jones is a mesmerizing figure to watch, especially when performing in concert, the film’s cinematography never matches the alluring presence of the woman it is documenting. This is especially noticeable when Jones is applying makeup or performing in her elaborate costumes. Considering the film was shot over several years, one gets the sense that Fiennes needed to have her camera ready at a moment’s notice, which might explain the graininess of some shots. Fortunately, Jones is so magnetic, such as when she chastises a TV producer for overly sexualizing the backup dancers, and empowering that she makes Grace Jones: Bloodlight and Bami entertaining despite its flaws.