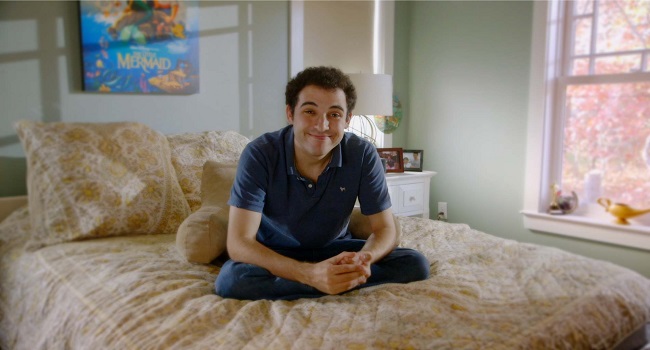 One of the remarkable things about Roger Ross Williams’ Life, Animated is the way it celebrates the power of film without feeling like a promotional tool for that which it praises. Disney movies have been leaving lasting impressions on generations of film lovers both young and old for many years. While their best films can effortlessly bring families together, it easy to forget how powerful this bond can be. An example of this can be found in Williams touching and uplifting coming of age documentary.

Based on the novel by award-winning journalist Ron Suskind, Life, Animated observes the challenges that the Suskind family endured when their youngest son Owen, was diagnosed with autism at three-years-old. Watching the child they once knew vanish before their eyes, the Suskinds did everything they could to get through to their child who only spoke what they describe as gibberish. One of the few constants that seemed to remain during this dramatic period for the family was Owen’s love for Disney animated movies. It was in this world of bright colours and exaggerated characters that the young man found comfort.

Little did the family realize that these iconic Disney characters would be the key to unlocking the mental gate that was blocking them from communicating in a way that Owen would understand. After a playful moment involving Ron Suskind using an Iago puppet, from the film Aladdin, to speak to Owen provides a substantial breakthrough, the family quickly figures out that Owen compartmentalizes the real world within the context of the fictional realm of Disney.

Life, Animated offers many interesting nuggets regarding how his family used this revelation to help Owen grow into a man who, at the commencement of the film, is getting ready to venture into the world on his own. Williams reminds viewers that despite the substantial gains Owen has made, he still has much to learn when it comes to such things as navigating romantic feelings, conversing with others in a casual way, and the daily responsibilities that come with living a self-sustaining life.

Through all of this, Life, Animated maintains an upbeat tone that is as charming as the animated films that are featured within it. Instead of turning the film into a promotional tool for the Disney conglomerate, Williams constructs an engaging portrait of the ways family bonds and cinema can give us the strength to overcome the unexpected challenges of life.