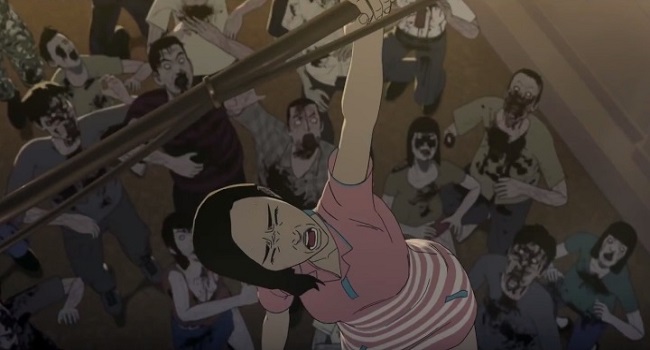 Before his first live-action film Train to Busan, Yeon Sang-ho’s created Seoul Station, an animated, chaos-ridden zombie caper and prequel to the smash hit film of zombies on a train.

In Seoul Station, parallel storylines take us on a treacherous journey. Passersby ignore an injured man when they realize he lives on the street, and his mentally challenged brother discovers him passed out in a corner of Seoul Station, a safe haven for the homeless. When he tries to get him help, the brother is bullied by other homeless men in a nearby shelter, and dismissed by security. The ailing man disappears only to be found feasting on an unsuspecting victim, spreading an unknown contagion and creating flesh-eating undead like himself. We also have Hye-sun (Shim Eun-kyung), a wayward young woman who lives with her sleazy boyfriend Ki-woong (Lee Joon). They are strapped for cash and soon to be evicted from their rooming house. Ki-woong has been pimping Hye-sun out to make money and she is no longer interested. After their breakup, Hye-sun’s boyfriend is forced to find her when her estranged father Suk-kyu (Ryu Seung-ryong) gets wind of her whereabouts during the infection outbreak.

Yeon’s zombie outbreak film is a commentary of how the homeless are treated in South Korea. With the issue being a real concern since the Asian Financial Crisis of 1997, and Seoul Station being a well-known hub for displaced, down on their luck city dwellers; the film shows how these individuals are treated as expendables, troublemakers and not worthy of any type of humanity or sympathy. Similar to the British mini-series In The Flesh, the zombie trope is used to show the discrimination within society, and also serves as an effective metaphor for the class division in South Korea. Yeon is well-known for his observations on class and society from his previous animated films The King of Pigs and The Fake, but here it is quite evident as he shows the social hierarchy within the homeless population, the disdain from the upper class, and the zombie virus as a great equalizer. At times the commentary was almost too obvious, with homeless characters remaining nameless and lumped in with the zombie collective, but the story redeemed itself with a great twist during the climax and foreshadows the break-neck speed of Train to Busan.

The animation creates a distance to the characters, but you can sympathize with Hye-sun and a homeless man she teams up with as they navigated the streets to survive the zombie outbreak and lament their individual situations. Look out as well for Suk-kyu’s Bruce Willis-like tenacity as he fights zombies to get to Hye-sun. There’s no real explanation for the outbreak until Train to Busan, so this prequel will leave you hanging if you don’t follow up with the live-action film. You’ll also notice both have father-daughter themes that tie them together with strikingly different outcomes. Visually, the animation avoided the typical anime feel. Instead it looks like a cross between a video game and comic strip, with muted colours that created a stark and bleak landscape, giving an art house feel to the film. It was a surprisingly nice change to typical animated fare.

Seoul Station is a must-see prequel, however you’ll find more context and invest much more with characters in Yeon’s live action film, Train to Busan.

Tickets can be purchased at the Reel Asian website.