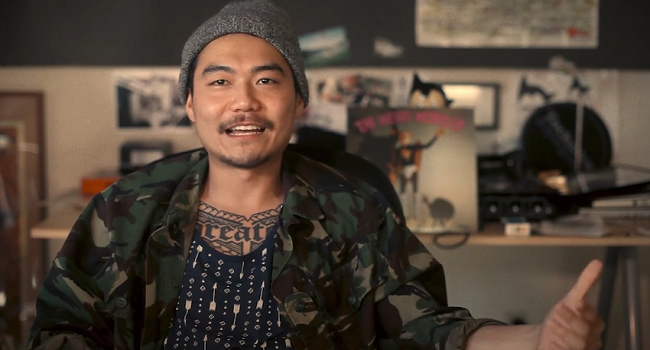 Hip-hop culture has reached a level of popularity that it truly transcends racial, gender and cultural lines. Despite this fact, many still associate the genre solely with African-American culture. Yes, artists like Eminem, B-Real, The Beastie Boys and Pitbull have help to shatter this illusion, but the road to mainstream recognition is still a long arduous journey for many. This is especially true for Asian-Americans rappers who are not only seen as outsiders within the industry, but are also constantly fighting against the racial stereotypes that have plagued Asians in popular culture for years.

In her engaging and insightful documentary, Bad Rap, director Salima Koroma explores the adversity Asian-American rappers encounter through the eyes of four unique artists: Dumbfoundead, Awkawfina, Rekstizzy and Lyricks. The most established of the bunch is Dumbfoundead. Starting out in the battle rap scene-his legendary 2008 Grind Time battle against Tantrum alone has already hit two million views on Youtube-Dumbfoundead is one of the few who has been able to build a lengthy hip-hop career. However, despite the respect and credibility he has received, mainstream acceptance has been hard to come by. The same cannot be said for Awkafina, whose quirky demeanour and catchy rhymes have brought her plenty of attention from the likes of MTV and various magazines. At the other end of the spectrum are Rekstizzy, whose outside of the box thinking might be too daring for mainstream audiences, and Lyricks who, like most spiritual individuals trying to walk a righteous path, finds it difficult to ignore the vices in his life. Both men are talented artists are eager to breakout of the independent scene, however, they refuse to lose their sense of individuality in the process.

The four subjects in Koroma’s film are each interesting and charming enough to carry the film on their own. However, what makes Bad Rap so riveting is observing the frank way in which these rappers view themselves and each other. While there is a deep respect and familial style love amongst the foursome, Koroma does not shy away from also showing the human moments of jealousy and insecurities that they all feel at one point or another. This also allows the film to pose a rather intriguing question about what is actually holding theses rappers back from achieving their dreams? Is it society’s limited view of what a rapper should look and sound like? Or is it the artists themselves who, while occassionally overindulging in their vices, are still trying to find their unique voice?

One thing is certain though, getting exposure of any from is as vital Asian-American artists. In one compelling moment Koroma enlists several music industry insiders to give their honest critiques on each artist. Aside from showing how little Asian-Americans artists have penetrated the consciousness of many in the industry, despite playing an integral part in hip-hop since the 1990s, these scenes effectively show that it will take more than crisp lyrics for these rappers to crack the complicated code needed to achieve mainstream success. Bad Rap is more than a film about Asian-American rappers trying to create a legacy for themselves and the generations after them. Embracing inclusive and rebellious spirit of hip-hop, Koroma constructs a film that empowers both its subjects and the audience to continually push the boundaries of expectation.

Tickets can be purchased at the Reel Asian website.