Rencontre
We often think of life in terms of big events. That first kiss that lights up our insides like an electrical charge to the system, the first car or home we own, etc. However, the truth is life is about the small moments. The random interactions that manage to stay in our conscious, and sometimes change our perspective on things. It is these moments that Brennan Martin’s Rencontre embraces.

The short film focuses on a French tourist, Sebastien (Florian Francois), who meets a homeless woman from Québec named Laura (Mylène Thériault) while traveling around North America. Excited to converse with another French speaking person, Sebastien offers to buy Laura lunch, but quickly finds out that not everyone appreciates her presence. While an intriguing small slice of life, Martin’s short film gets a little muddled towards the end. The film touches on the prejudices that homeless people often endure but, at the same time, inadvertently perpetuates the myth of homeless individuals as being untrustworthy. Fortunately, both Thériault and Francois give strong performances that help the film overcome its bumpy ending. They display genuine chemistry and makes us curious to see what will happen to their characters after the film ends. 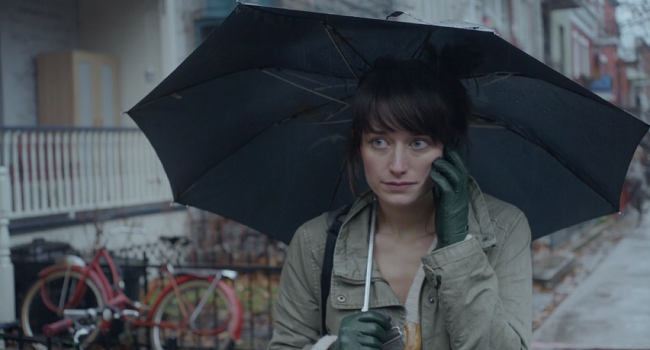 Denial (Le Déni)
Claudia Hébert’s short film Denial unfolds slowly, and somewhat deceptively. Through a series of well-structured scenes Hébert provides snapshots into Sara’s (Geneviève Boivin-Roussy) life. As she goes about her daily activities we observe as she leaves a series of messages for a man who does not seem to want to call her back. At first the messages are playful, such as sending kisses over the phone, but soon Sara’s behaviour starts to become obsessive and unhealthy. It is here where the true nature of Hébert’s film comes into view.

Crafting a beautifully honest portrait of our inability to let go, Denial forces us to reflect on how easily those who we consider to be our foundation in life can leave us. As we see in the film, grief can be as crippling as the tragedy that caused it. Thanks to Geneviève Boivin-Roussy’s sensational performance, one in which she conveys a range of emotions, Hébert’s film is able to pack and emotional punch that never feels forced.