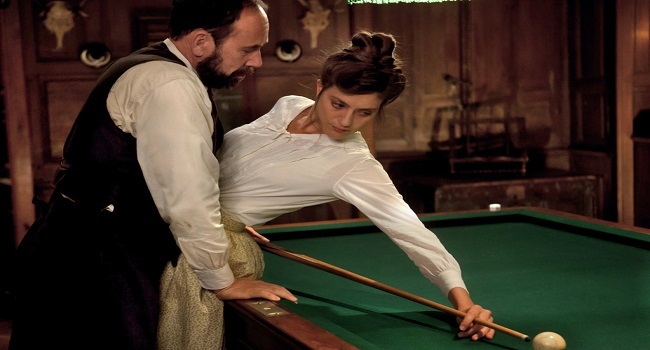 As the first World War rages on, a young widow named Angèle (Georgia Scalliet) takes a job as a homecare nurse for a former cavalry officer Charles (Olivier Gourmet) who has lost a leg in the war. Even though she is initially warned that her new patient is prone to some very bad moods, Angèle’s presence seems to immediately lift Charles’ spirits. With their shared interest in horses, pool, and sex jokes, it isn’t long before the two become the best of friends. The trouble is, Charles isn’t exactly subtle about wanting more than friendship and Angèle, despite making it quite clear that she feels no desire for him whatsoever, eventually agrees to marry him.

Now, the official synopsis of the film would have you believe that their union, although born of mutual convenience, evolves into a “passionate love affair”. I’m not sure that’s how I would describe it. Their love affair may better be described as “scheduled sessions of awkward sex on Tuesday nights that end in Charles promising to do better next time”. Because her heart still belongs to her fallen lover, Angele has a lot of trouble feeling anything but friendship for her husband, leading to a growing resentment between the two.

The Scent of Mandarin may not be the film that I was prepared for, but there’s a lot to like in it. Set in rural France in 1919 and featuring a lot of symbolic horseback riding, it is beautiful to look at its costume and production design both received César award nominations. The deliberate pacing allows for the relationship between the two leads- both very well-played- to develop without seeming forced. Their dynamic may not be the “passionate love affair” that I had pictured, but it does feel real.