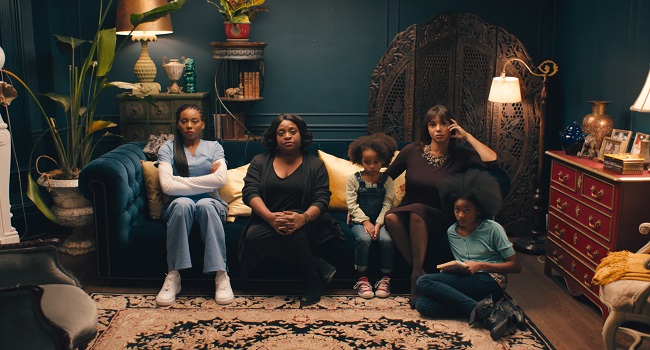 Do not be fooled by the jazzy New York vibe of Stella Meghie’s multigenerational comedy Jean of the Joneses. While it is reminiscent of the works of Woody Allen and Whit Stillman, Meghie’s film has its own wonderfully distinct voice. The film follows the mishaps of Jean (Taylour Paige), a promising young writer who is squandering away her talents. Despite being touted by the New York Times as a writer to watch, Jean is having problems getting her creative juices flowing. Unable to write, and recently dumped by her boyfriend, Jean finds herself homeless and relying on the kindness of family. Unfortunately for the neurotic Jean, her family’s definition of kindness comes with a healthy dose of insults and judgment. When the grandfather she never knew winds up dead, and family secrets begin spewing like a burst dam, Jean is forced to take a good look at her lineage and herself in the process.

Crafting a confident feature debut, Jean of the Joneses crackles with wit thanks to Meghie’s gift for dialogue. She smoothly displays how much the past impacts one’s future. In touching on the grudge and pride that affected Jean’s grandparents’ relationship, Meghie effectively shows the ramifications that it has on the various generations of women in the family. Especially in regards to the way they interact with the men in their lives. While the love story between Jean and a paramedic Ray (The Get Down’s Mamoudou Athie) evolves nicely, it thankfully never overshadows the central dynamic between Jean and her all-female clan. It is in watching the women interact, and attempting to navigate their individual issues, that the universal themes of life, family, death and guilt shine through.

Featuring strong performances from Taylour Paige, who is charming as the stuck in her own head Jean, and the rest of the supporting cast-including Sherri Shepherd, Gloria Reuben and Erica Ash-Jean of the Joneses is a film full of biting wit and genuine emotion. The film announces Stella Meghie as a filmmaker who we need to pay close attention to moving forward.

Tickets can be purchased at tiff.net