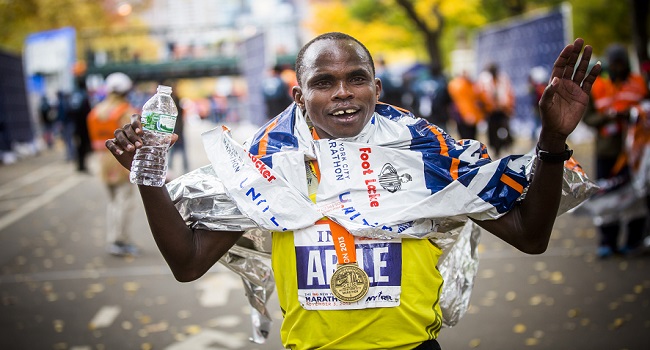 I was a little uncomfortable when I discovered that this documentary about Kenyan warriors had a pun in its title.

With armed cattle rustling getting out of hand, the Kenyan government introduced a disarmament program in 2004 to end the violence. Warriors like Julius Arile and Robert Matanda were encouraged to turn over their guns in exchange for amnesty and a pair of running shoes. With their new shoes, many Kenyans decide to leave their life of violence and begin training as marathon runners. Hence the title of Anali Nayar’s documentary.

The transition from warrior to athlete isn’t an easy one. Arile and Matambo, friends since boyhood, got their first guns when they were in primary school and have grown accustomed to the seductive feeling of power and fearlessness that they bring. For Atale, who has been fortunate enough to never have had to kill anyone, the notion of putting all those years running from the police to good use by racing is an exciting one. For Matambo, who has earned much more of a reputation for violence, turning in his weapon is a much scarier decision because he risks retribution for his past crimes.

So they both begin training for the Tegla Loroupe Peace Race. Arile shows tremendous potential and gets to compete in Prague and at the New York City Marathon. Matambo, on the other hand, can’t quite keep up and stays fighting the good fight for peace at home, eventually getting involved in politics. The more opportunities come Arile’s way, the more Matambo feels that his friend has forgotten where he came from and the more jealous he becomes. Filmed over 8 years, Nayar’s film follows the impact on a lifelong friendship when their two paths diverge. No fiction could feature story arcs that are more epic.

As much as I wish that Nayar had thought of a better title, Gun Runners is a wonderful documentary. Its gorgeous cinematography looks better than most features do. Better yet, as likeable as her subjects are, Nayar resists the urge to portray Arile and Matambo as one-dimensional inspirational symbols and doesn’t try to hide the fact that these are real and flawed human beings. She makes them easy to relate to and impossible not to root for.