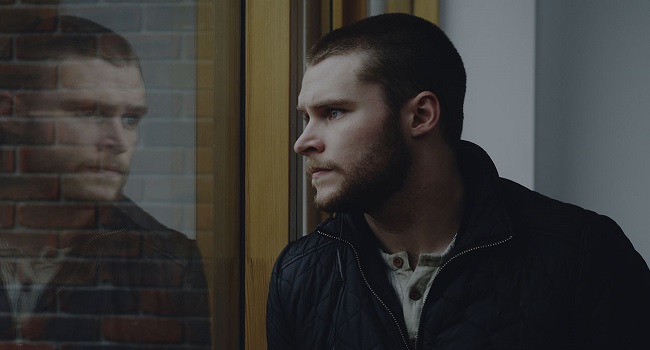 There is a tendency in film, when dealing with tales of addiction, to play up the sensational. The extent of the subject’s substance abuse must be marked by a tremendous fall from grace. Gerard Barrett’s latest film Glassland avoids such conventions. It shows the destructive nature of addiction not through the eyes of the alcoholic, but rather the loved one forced to deal with the fallout.

By all accounts John (Jack Reynor) lives a rather mundane life. When not picking up customers in his Dublin taxi cab, he spends his days watching television and playing video games with best friend Shane (Will Poulter). While Shane makes plans to leave the comforts of their hometown, in hopes of starting anew elsewhere, John unfortunately has an anchor that he is unable to break free of. Forced to routinely watch his mother Jean’s (Toni Collette) dangerous descent into alcoholism, John finds himself in a difficult position. He does not want to abandon his mother when she clearly needs him the most, but he also cannot continue to slowly watch her kill herself in the process.

After a particularly bad drinking incident lands Jean in the emergency room, his mother’s AA sponsor (Michael Smiley) advises John of a treatment center that might be best equipped to help save his mother’s life. Unfortunately the cost of the center is more than John can afford. Desperate to get Jean the treatment she needs, John enters the world human trafficking for quick cash, but is unprepared for the way it tests his moral limits.

Riding a somber wave of emotions, Glassland is a drama that manages to pack quite an emotional punch despite its seemingly quiet demeanor. Barrett weaves together a tale that feels painfully honest. Emotions do not explode often on-screen but, when they do, they linger in the audience’s mind long after the film ends. A perfect example of this comes when Jean recounts the demise of her relationship with her former husband and why she no longer acknowledges John’s older brother Kit (Harry Nagle), who has special needs. There is a gut-wrenching sadness to Collette’s delivery. While her words do not justify the alcoholism; they offer intriguing insight into to it.

For his part, Reynor does an exceptional job as the sullen cabbie with the weight of his family on his shoulders. Tasked with conveying the internal pain John feels for most of the film – though there is a sensational scene where desperation and heartache causes John to unleash the rage he has bottled up for so long – Reynor is a revelation. He is effective in bringing out the many layers of John that are being stifled by his mother’s addiction.

Providing an emotionally raw portrait of the impact of substance abuse on a family, Glassland is a mesmerizing film. Barrett does not provide much in the way of easy answers, nor should audiences expect him to. The film smartly opts to simply offer a faint ray of hope within its somber clouds. When it comes to dealing with addiction, hope is all that one can really cling to.