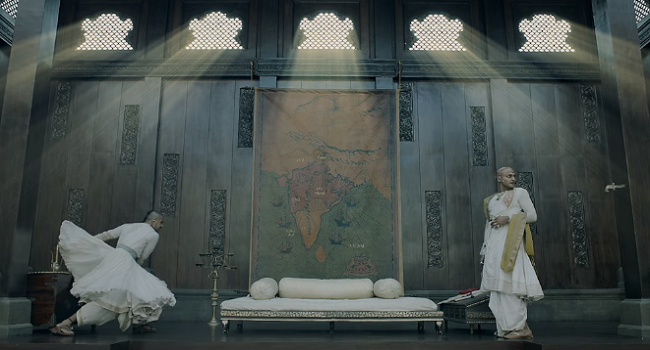 Bollywood received a stunning jolt at the end of December with the release of Bajirao Mastani. There’s a lot that the film offers, but its cinematography undoubtedly walks off with the game. Finding creative ways to use lighting and colour to make sets look both flamboyant and stoical is tough feat in itself, however, cinematographer Sudeep Chatterjee manages to do a fabulous job achieving this. While Dhoom 3 and Bahubali were more expensive films in the Indian film industry than this, they failed to exhibit individuality. Bajirao Mastani not only feels distinct but is also, to my knowledge, the first Bollywood film to have used vertical shots generously and expressively.

Cinematic storytelling has definitely seen a momentous improvement in Indian cinema in 2015 with films like Tanu Weds Manu Returns, Piku, Manjhi: the Mountain Man, and Tamasha, creating unforgettable characters out of stunning performances. It is, however, director Sanjay Leela Bhansali’s ability to feed the audience’s desire for compelling narratives that makes Bajirao Mastani impressive. At the outset, the film has a disclaimer saying it is only loosely based on the love story of two historical characters: Bajirao and Mastani. Yet, as the film progresses there’s more than a mere romantic story. There are the singular stories of Bajirao, Kashibai, Mastani, their evolution, their lives together, and simultaneously the story of an India that should have been blessed with more Bajiraos, Mastanis and Kashibais.

Peshwa- a term equivalent to Prime Minister- Bajirao Ballal (Ranbir Singh) of the eighteenth century Maratha empire, who’s already married to a beautiful, loving and competent wife Kashibai (Quantico’s Priyanka Chopra), unexpectedly falls in love with the brave and gracious warrior-princess of the Rajput kingdom of Bundelkhand, Mastani (Deepika Padukone). Mastani becomes Bajirao’s second wife, but the Maratha Brahmin society shuns her presence because her mother is a Muslim woman. Attempts are continuously made to keep her and Bajirao apart; his mother and brother even plot her death.

Kashibai suffers when she learns of the liaison, however, we don’t feel pity for her: Priyanka makes sure we don’t. She doesn’t give in to misery and remains as poised as always, for she is the queen by right. Nevertheless, the pain behind her poised demeanour is still effortlessly conveyed to the viewer. On the other hand, we cannot even condemn the lovers for inflicting pain on Kashibai or for appearing selfish: they are more like two children who know not of anything but love and expect even Kashibai to embrace them with love. Nothing sways the pair from loving and wishing for more love. Their love is not tied to worldly conventions, but sets an example of a higher integrity of relationships that humanity needs. 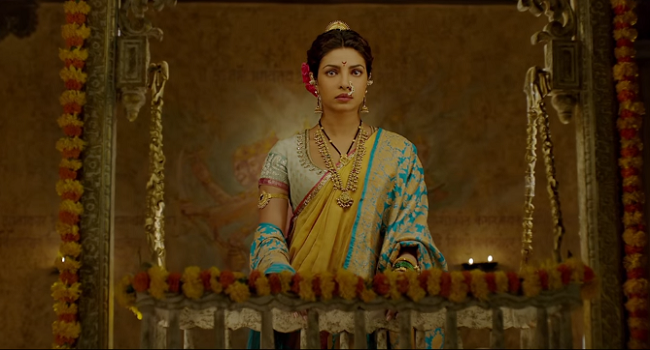 Flamboyant settings, tragic love stories and Indian culture have always been the primary motifs for most of Sanjay Leela Bhansali films. Bajirao Mastani , though, is different from the previous ones (despite having a strong thematic resemblance to Ram Leela and Devdas – all of them being about star-crossed lovers) for it incorporates a subtle socio-political reference towards existing Hindu-Muslim relations. The heritage which spoke of unity soon dissolving in an animosity beyond battle grounds: where the words ‘Hindu Swaraj’ (self-rule) no longer meant a battle against domination, but a battle against religion and against all the wisdom that religion held.

Bajirao Mastani also does a good job by giving the female characters full reign to draw out the strengths and traits of ‘the woman’ in them: Mastani’s courage, Kashibai’s endurance and their untold love and respect for each other. In one scene, Radhabai (Tanvi Azmi), Bajirao’s mother, while conversing with Kashibai indicates that compared to the Muslim societies, Hindu women enter into a stricter bondage with marriage and have no way out. Unlike Radhabai, who appears orthodox, unscrupulous and incapable of unbiased love, Kashibai doesn’t appear to long for any hollow freedom; beyond the tears which often threaten to trickle down her face, her eyes blaze with a determination to endure. She charts her own course in life and is compassionate and fearless enough to forgive Bajirao and Mastani.

Thanks to the crisp and thought-provoking dialogue, which does not drag the narration by resorting to unnecessary explanation or melodrama, Bajirao Mastani lives up to the level of excellence of classics like Mughal-E-Azam and gives us even more. The film brings back a sense of heritage: Deepika’s handling of the mandolin with agility and grace and her dance performances are thoroughly captivating. Bhansali doesn’t miss a single opportunity to make apt use of folk elements and dance forms. When tradition is brought to life through modern means, the result is worth taking pleasure in. Besides, through the episode of Aina Mahal (glass palace), where light and reflections create magic, Bhansali seems to be taking pride in exhibiting the remarkable knowledge of science that the Indian heritage carries.

The only flaw in the entire film, for me at least, is the unnecessary and out of context inclusion of the dance performance by Bajirao, but we are talking of a Bollywood commercial film here! The film can’t thrive financially without such a sequence by the lead actor; so, maybe we can spare this criticism since on the whole the film confers a visual delight. Before winding up, it’s worth a mention that despite the disclaimer, anyone with a fair knowledge of Indian history will find the movie quite respectful towards facts. Even if certain part of the romance rests on imagination, it is to be expected, after all, what is art without a little fancy?

A woman who relentlessly strives to stay mystified by nature's ways; who doesn't seek to hear the unheard, know the unknown but feel the ever felt... the sweeping waves of eternity in each moment of life! View all posts by Rituparna