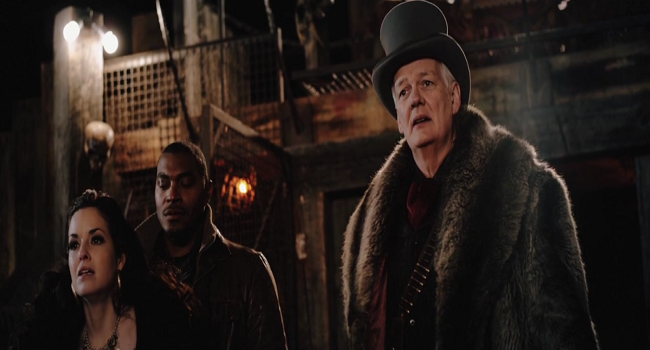 A lone, stoic horseman leads us into a world of lost love, danger and otherworldly spectres in the fantastical pilgrimage Night Cries.

A heartbroken Joseph (Andrew Cymek) is determined to find his wife Sarah (Brigitte Kingsley). Five years ago she died of cancer, and he has vowed to find a way back to her. After consulting a formidable voodoo priestess (Mishael Morgan), and with the help of his solemn friend and priest D’Kesh (Jacob Blair), Joseph consumes a potent mixture of herbs in order to kill himself and travel to the afterlife in search of her. It is there that he encounters villains of all types, from demons to henchmen, and worst of all, the medieval tyrant known only as The Hat (Colin Mochrie), as they all try to thwart his attempts of a reunion.

Night Cries takes the iconic figures of a traditional western: the lone moody traveller, the priest, the damsel in distress and the tyrant, and drops them into a fantasy/romance filled with medieval brutality and religious overtones. The film has plenty of heart, and it seems deeply personal, but it misses on one major point for me. Joseph searching for his wife and battling evildoers is one thing, but an unlikely, foul-mouthed sidekick named Caitlyn (Aislinn Paul) takes away from the main story. Her humour, distracting CGI, and origin arc diminished the sense of heartache between Joseph and Sarah. Caitlyn should have been cast as a full-blooded actress to make the character more relevant. It was refreshing, however, to see comedian Mochrie as a villain. He successfully portrayed the afterlife overlord with the right amount of vigor.

Director, writer, and star Andrew Cymek seemed to put his all into the film. He went so far as to contribute to set building and wardrobe, which is more than admirable. However, there are just too many ingredients in his genre blending fantasy soup. Certain scenes could have been edited tighter, or left out completely, to ensure that the story flowed in an efficient and coherent way. I will say that the sweeping orchestral scoring, and the climatic finale, tugged at the heartstrings a bit. It is just a shame the whole film could not do the same.

Ultimately you will either love or hate Night Cries. Some will find that the love story resonates well above the amalgam of genres, and others will hate it because of the overflowing mixtures in Cymek’s stew. Though it definitely gets marks for originality and heart, Night Cries just did not live up to its ambitious goals.