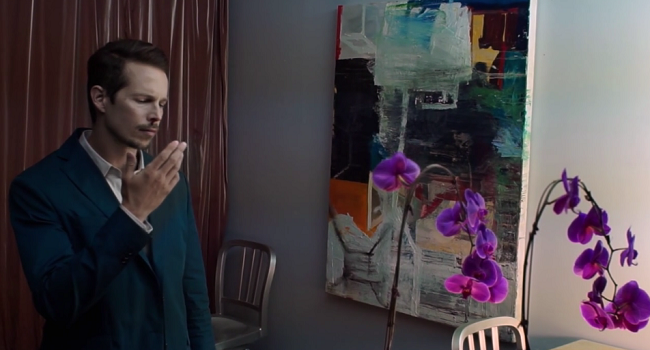 When Canadian filmmaker Karen Lam has an idea, I always brace myself for the ascension that’s about to commence. With her body of work, there is nowhere to go but within, exploring minds that conjure other dimensions and expand reality. A horror filmmaker by brand, Lam additionally makes her imprint in dark fantasy, creating works that are the perfect gateway into the soul for those who champion unconventional stories.

Her latest film Chiral is an unsettling meditation on identity. On a personal note, I have discovered that any amount of uncertainty with this concept can make someone waver. It feels as if you’re walking a tightrope high above the ground and your balance isn’t all that great. This is something we all feel in at least one season of our lives. It’s a big part of what makes Chiral such an intense experience.

Hank (Nelson Leis), a talented artist, upon arriving at his gallery exhibit, witnesses his grip on control shatter in a bizarre fashion, resulting in a confrontation that may change the course of his future. Lam’s masterful craftsmanship with surrealism and narrative offers a symbolic snapshot of Hank’s journey of transformation. The erratic sound and visual atmosphere at times disrupts, with an intent that mirrors the central character we see on screen, quite effectively. The dubious nature of Hank’s sensibility is challenged when an incident which can be described in this film as quite Cronenbergian takes place.

As the word chiral itself suggests, “an object that is not identical to its mirror image,” what Hank poses as self isn’t what his reflection sees. An intriguing concept with a questionable outcome, it is a film that only Lam’s skilled hands could pull off.

Tickets can be purchased at the Blood in the Snow Canadian Film Festival website.

View all posts by Ashlee