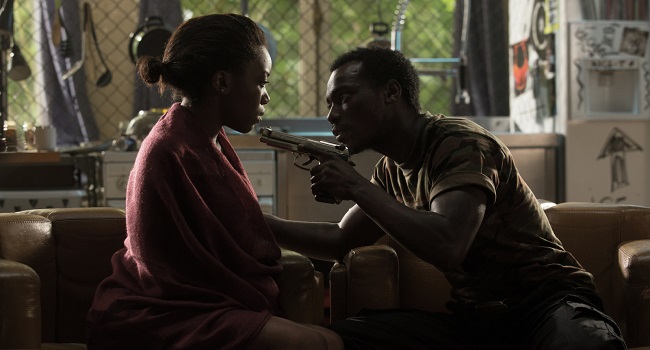 For those wondering what a version of Romeo and Juliet would be like if it was filled with all Tybalts and no Mercutios look no further than Adil El Arbi and Bilall Fallah’s Black. A film that strives to offer City of God styled gritty social commentary, but ultimately comes up short. Set in the city of Brussels, this modern tale of star-crossed lovers takes the audience deep into the racially charged world of gang culture.

The lovers at the core are from rival gangs who meet after both experience run-ins with the law. 15-year-old Mavela (Martha Canga Antonio), a black girl busted for shoplifting, finds herself drawn to the charms of fellow delinquent Marwan (Aboubakr Bensaihi), a Moroccan caught using stolen credit cards. Despite being from different gangs, she of the Black Bronx and he of the 1080s, the pair begins a romance in secret that could potential pave the way to a better future. Of course their respective gangs have other plans for the lovers once their relationship is discovered. Mavela quickly learns the consequences that come with betraying the rules of the Black Bronx.

Told primarily from Marvela’s perspective, Black aims to present a world where discrimination and poverty has pushed many of the immigrant youth in Belgium into the alluring arms of gangs. The problem is that the filmmakers let their obsession for gritty realism overshadow the main characters. The iconic Romeo and Juliet narrative has survived centuries because their forbidden love was always at the forefront. In Black, Marvela and Marwan’s relationship feels more like a footnote to the proceedings. Furthermore, Marvela ultimately becomes a helpless passenger in her own story. While it can be argued that this is El Arbi and Fallah’s way of emphasizing what it is like for young women within a male dominated culture, Céline Sciamma’s Girlhood tackled these same themes in a far more convincing manner without losing sight of the main character.

This leads to the most troubling aspect of the film, its uneven and downright offensive depiction of the two racial groups. The Moroccan gang is shown in a far more favourable light than their darker pigmented counterparts. The film portrays Marwan and his pals as mere juvenile delinquents who enjoy stealing purses and throwing the occasional molotov cocktail at cop cars. Heck, even their degrading treatment of women comes off as a harmless “boys will be boys.” As dimwitted as he is, Marwan is ultimately the good natured hero who encourages Marvela to leave the gang life, though it is never the other way around.

While Black presents gang life as something only escapable by death, Marwan seems to have actual options if he decides to walk way. The worst thing that will happen if he leaves, of his own free will mind you, is that he would have to get a job or live on welfare. The same cannot be said for Marvela.

The Black Bronx are the personification of hell on earth. The gang exemplifies every offensive black stereotype you can think of – one would think that Black was written in the 1920s if it was not for the pulsating hip-hop soundtrack. They are presented as ruthless and oversexed animals that devour their own as easily as they would shoot a stranger on the street. One just needs to look at how the two impactful rape scenes in the film are handled as further proof of this. When a Moroccan girl with ties to the 1080s is raped, the filmmakers depict the Black Bronx as lecherous lions circling their seemingly innocent prey. The actual rape itself takes place off screen, which is a direct contrast to what occurs when the Black Bronx rape a black female. Here the vile nature is depicted as graphically as possible. To make matters worse, the camera frequently lingers on the black female form, frequently sexualizing it in a way that the further promotes the lewd carnal nature of the gang.

Outside of the lone black cop in the film, who is stuck behind a desk while his fair-skinned equivalent patrols the streets trying to steer the 1080s into becoming more productive citizens, there are no black characters really presented in a positive light. They are all criminals or, in the case of Marvela’s mother, spineless individuals who are so desperate to be accepted by white society.

Black wants to hit home the themes of race, poverty, rape culture, and disenfranchised youth, but it frequently stumbles on its own uneven path. The unintentional one-sided nature of how the characters are drawn ultimately muffles the message the filmmakers are trying to achieve. While the film is well shot and shows moments of genuine promise, Black’s indulging descent into archaic racial stereotypes is simply too offensive to ignore.