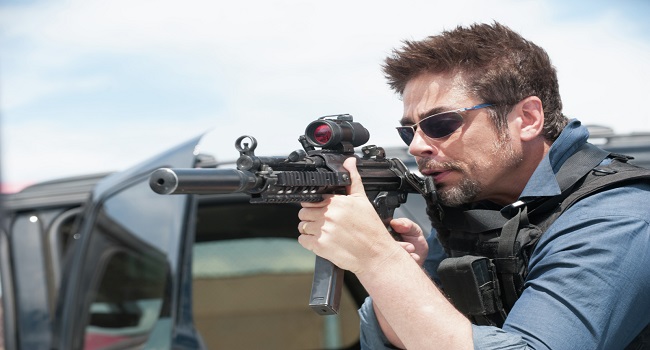 Early on in Denis Villeneuve’ taut drug-war thriller Sicario, Alejandro, the grizzled and mysterious task force advisor, instructs FBI agent Kate Macer (Emily Blunt) that “nothing will make sense to your American ears…it will all make sense in the end.” The words are meant to calm her insecurities about a mission she has no idea why she has been selected for. However, they also signal that she, and the film’s audience for that matter, are about to step into a whole new world. One where traditional rules and ethics will only get you killed.

Diving into the murky waters of the hellish world of drug trafficking, the film follows Kate as she goes from working missing person cases to be recruited into a special inter-agency task force. Led by Matt (Josh Brolin), a man who embraces chaos with the same gleeful excitement as a child on Christmas morning, the goal of the group is to infiltrate and bring down one of Mexico’s biggest cartel bosses. Aided by Alejandro (Benicio Del Toro), a specialist in the ways of cartels, but whose government affiliations are shady at best, Kate is quickly exposed to a series of procedures that directly conflict with her idealistic nature.

Immersed into a world where deadly shootouts in front of civilians, forceful information gathering, and continuous deceit are simply part of the job qualifications, Kate struggles to process all that she witnesses. Desperately wanting to keep above the quicksand of ambiguity and blurred ethical lines, Kate is forced to reconsider what America’s war on drugs is really about.

Ripe with tension and moral complexity, Denis Villeneuve has constructed one of the best films to tackle the intricacies of the trafficking trade since Steven Soderbergh’s Traffic. While both films touch on the problems that come with trying to cut the legs off a multi-tentacle behemoth like the illegal narcotics industry, Sicario crackles with its own unique brand of blistering commentary. The film is not shy about taking aim at the ineffectual nature of America’s war on drugs. It suggests that they are playing a costly chess game were innocent civilians are the disposable pawns, sacrificed without a care in hopes of gaining control of the board.

Taking a slow burn approach for the most part, the interspersed action scenes hit like a shock to the system, Villeneuve does a masterful job of choosing when to release key bits of information. There are certain characters, take one family in Mexico repeatedly shown for example, whose significance does not become clear until much later in the film. As the audience sees things through Kate’s confused eyes, the lack of information only heightens the tension and fear Sircario emits.

Teaming up again with cinematographer Roger Deakins, Denis Villeneuve manages to crafts a sweltering, and truly stunning, film. Whether he is capturing the hellish nature of Juárez, a city in the Mexican state of Chihuahua, where decapitated bodies hang from bridges as if they were the cartel’s calling card, or taking the viewer on a thrilling night vision infused mission with the task force, Deakins further adds to the film’s overall richness.

Filled with strong performances by the three principle leads, Sicario is a gripping action-thriller that rarely eases up on the tension. While individuals like Matt only want to “shake the tree and create chaos,” the film is more interested in the fallout that average civilians south of the border must endure as a result. At the end of the day the war on drugs has less to do with the illegal narcotics and more to do with who holds the power.