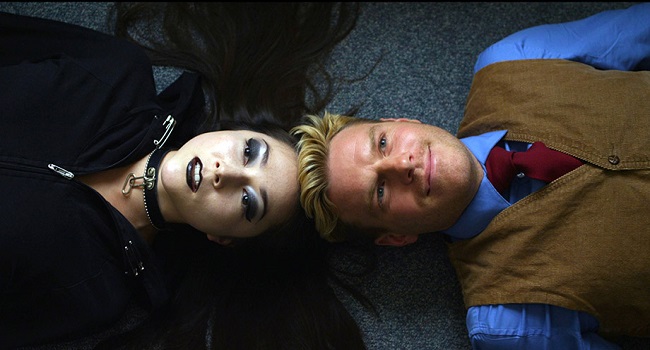 Drowning his sorrows in a self-medicated alcoholic fog, former child star David Gold (Pat Mills, who also wrote and directed the film) is in a tailspin that he cannot seem to pull out of. Being unemployed, perpetually late on his rent and recently diagnosed with skin cancer has done little to provide any light at the end of his depressed tunnel. After his sister finally refuses to loan him anymore money, Gold decides to take matters into his own hands. Inspired by a video on Youtube, Gold starts believing that his purpose in life his to help invigorate young minds. Despite having no formal training, Gold embarks on his greatest role yet by assuming the identity of a guidance counsellor.

Miraculously landing a job at a local high school, which clearly has a shoddy track record when it comes to basic background checks, Gold begins sharing his unorthodox brand of self-improvement philosophies with the students. Relating to the kids on their level, while sharing vodka shots and smoking weed, Gold swiftly becomes the most popular teacher at the school. His reckless, though at times honest, nuggets of advice strikes a chord with a few of the school’s most impressionable minds. One student in particular, Jabrielle (Zahra Bentham), who lacks self-esteem due to a turbulent relationship with her mother, is so taken with Gold’s methods that she willingly risks it all for him when his ruse eventually goes south.

Playing in the same devilishly funny realm as films such as Bad Teacher, and to a lesser extend Role Models, Guidance does not hold back the comedic punches. However, unlike those films, Pat Mills never resorts to juvenile humour to raise the shock factor. Instead he allows his sharply written script to evolve with fluidity and genuine heart. One of the impressive feats about Mills’ construction is that Gold’s actions, as horribly misguided as they are, always stem from an earnest place. This film could have easily gone into unnecessarily dark terrain had Gold not been such an endearing character.

As Guidance evolves it becomes clear that Mills’ is as much making a commentary on our unhealthy obsession with ever-fleeting fame, as he is making a statement on the growing disconnect between out-of-touch adults and modern youth. This is not to say that Mills tiptoes around the fact that Gold has serious mental issues. In fact he finds unique ways to build on this particular character trait. Described in the film at one point as “psychologically disturbed and pathologically immature,” Gold’s unpredictable nature provides Mills with the opportunity to take his film in several unexpected directions.

Avoiding the sitcom style tropes that one might expect from a premise such as this, Guidance proves itself to be a surprisingly funny and darkly charming romp.