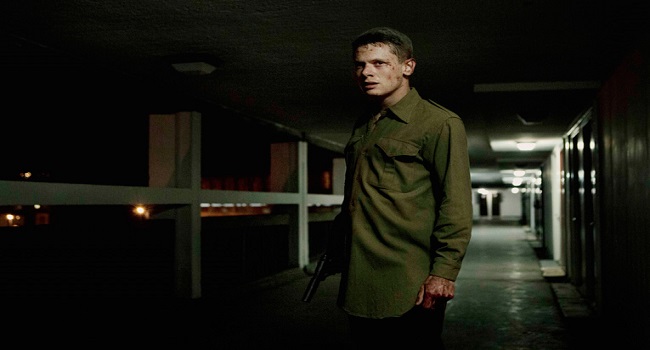 Private Gary Hooks (Jack O’Connell) is stuck in a nightmare that he cannot wake up from. Assigned to crowd control duties during an uprising in Northern Ireland, in the early days of “The Troubles” no less, Hooks finds himself separated from his team when an unruly mob forces the soldiers into a hasty retreat. Stranded in the stygian streets of Belfast, and stalked like fawn in a den of trigger happy lions, he has no choice but to run for his life.

’71 takes the soldier stuck behind enemy lines aesthetics and entrenches it deep into the realm of genre filmmaking. The narrative is not concerned with the political conflict that serves as it backdrop, but rather how Hooks copes with being blindly dropped into the situation. Only the basics regarding the nature of the unrest are revealed. Hooks learns before entering Belfast that the region is split between the Protestant Loyalists and the Catholic Nationalists, the latter being the more hostile group. As Hook navigates through back-alleys and side streets, details slowly emerge linking the Nationalists with both the IRA (Irish Republican Army), local street gangs, and even Hooks’ military superiors.

Riding a sustained wave of tension, Yann Demange’s film succeeds largely in part because it places the viewer squarely in Hooks’ disoriented shoes. As if traveling through an urban house of horrors – every new street, bar, and individual Hooks encounters carries the potential for danger – Hooks harrowing journey is one fuelled by fear and adrenaline. The constant sense of the unknown only adds to the unnerving intensity that pours from the screen.

Although Demange provides the audiences with slightly more insight into key characters than Hooks gets, ’71 is still very lean when it comes to overall character development. Several of the individual that Hooks comes across, take a former military doctor and his daughter for example, only provide a surface level taste of what it is like to live in such a politically charged climate. Their main purpose is to move Hooks tense situation forward. While Jack O’Connell is captivating in the lead, relying heavily on facial expression to convey the fear and pain he endures, the fact that Hooks is given limited dialogue hinders the production somewhat.

Though the film does a wonderful job of creating a sense of disorientation, the latter acts only help to make the overall disconnect between the audience and the characters on screen even clearer. There are no characters outside of Hooks to truly grasp onto. As the gangsters and crooked British soldiers close in on him, the viewer can only watch from a distance as the characters go through the expected motions.

Thankfully ’71 builds up so much tension throughout that its shortcomings in the latter stages can be forgiven. Demange’s film offers a gripping cat-and-mouse chase that utilizes the best in genre conventions. It may not provide the history lesson some viewers hope for, but ‘71 is one thrilling ride nonetheless.