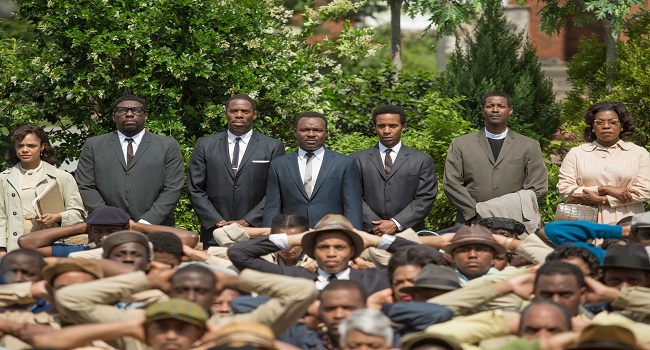 A man on horseback emerges out of the dense fog like a hunter who has spotted his prey. Unraveling the whip in his hand, he strikes down one of the terrified individuals running away in fear. It is easy to imagine this scenario playing out in a traditional slave narrative, but this is Selma, Alabama in the early 1960s. The man on the horse is one of the many Alabama state troopers in riot gear who has turned a peaceful civil rights march on the Edmund Pettus Bridge into a war zone.

The lasting impact of this horrific display of violence is encapsulated in a simple shot of the “Edmund Pettus Bridge” sign a few days later. Similar to the marchers who graced its surface, years of enduring a difficult climate has left it battered. Rust cascades down from each letter like tears of blood. It is an image that quietly, but effectively, echoes the haunting price that thousands in the Civil Rights Movement paid. For Martin Luther King Jr. and the other protesters, the events in Selma are more than simply obtaining the right for blacks to vote unencumbered, it is another hill in the seemingly endless mountain they must climb in their quest for freedom and equality.

The heavy burden of the journey is one of the numerous aspects exquisitely depicted in Ava DuVernay’s Martin Luther King Jr. biopic Selma. The film even opens with the bombing of the 16th Street Baptist Church that killed four little girls. A sad reminder that for each victory the movement achieves, there is always another battle just as harsh to fight. Instead of highlighting the various triumphs in Dr. King’s (David Oyelowo) well-documented life, the film provides a snapshot of one particular moment in time. DuVernay shows a version of Dr. King who has obtained great power within the movement by spearheading many of its successful initiatives. However, he is becoming weary of both the fight and weight of the lives that have been lost in the process. Though his tireless efforts for equality led to him winning the Noble Peace Prize, Dr. King is still viewed as nothing more than a troublemaker in the minds of many, including President Lyndon B. Johnson (Tom Wilkinson) and Alabama Governor George Wallace (Tim Roth), who would rather maintain the status quo in an election year.

Dr. King knew that the only way for change to occur was if everyone, at all levels, got onboard. This was a tough task in itself considering that years of struggle were starting to fray certain bonds within his inner circle. Though their goals were the same, many had vastly different the ideas on how to go about achieving it. Some of the best moments in Selma arrive when DuVernay is focusing on the inner squabbling amongst the members of the Civil Rights Movement. She brings added weight to the conflict by showing how each passing day on the frontlines is putting further strain on Dr. King’s marriage to wife Coretta (Carmen Ejogo).

The sense of urgency within DuVernay’s film feels as critical today as it did back in 1965. Although society has made major strides in the 50 years since the incidents in Selma, it is hard to watch a cop in the film shoot an unarmed man named Jimmie Lee Jackson (Keith Stanfield) and not reflect on Ferguson and the countless examples where this has practically become a regular occurrence. Some have claimed DuVernay’s film benefits from the luck of timing, however, this line of thought unfairly discredits both the films’ overall achievements and the long standing racial tensions that exist in America.

Two components of the film that are hard to knock are the wonderful cinematography and the blistering performances. Similar to his work in Pariah, Bradford Young shows once again why he is one of the best cinematographers working today. He not only knows how to bring out the richness of darker skin tones, but also gives the film a hauntingly beautiful texture. Young evokes a sense of gravitas in every scene regardless of whether Dr. King is rallying the citizens of Selma, or contemplating if he has the strength to carry on with the fight.

These sections are further accentuated by the career defining performance of David Oyelowo as Martin Luther King Jr. Oyelowo takes one of the most influential figures in American history and strips him down to the core. He expertly conveys that, despite all the achievements, Dr. King was still a man who had flaws and doubts just like everyone else. One of the great things about Selma is that DuVernay allows others within the Civil Rights Movement to shine as well. The audience is left to wonder why films about the numerous other important figures, such as Rev. Hosea Williams (Wendell Pierce) and John Lewis (Stephan James) to name a few, have not been made yet. In regards to the latter, Stephan James was quite a revelation in Selma. Considering that the talented supporting cast featured the likes of Lorraine Toussaint, Tim Roth, Oprah Winfrey, Giovanni Ribisi and Dylan Baker, it is a testament that James was able to not only hold his own amidst these actors, but in many cases out shine them.

Selma is a captivating film that feels both timeless and relevant at the same time. Ava DuVernay provides a blistering sense of energy and urgency to a fight that, despite its major victories, still has a long way to go. It is only when we all make the effort to right the wrongs in our society together that Dr. King’s dream will truly be realized.