Jim Bennett (Mark Wahlberg), an associate literature professor at a local University, is an all or nothing type of guy who firmly believes if you can’t excel at a task you should just give it up. He brings this attitude to his job as well. When not confronting his students with highly personal questions, Bennett sits amongst them devoid of any passion. Going through the motions, he fails to realize that his role is to inspire students, like Amy Phillips (Brie Larson), who have the potential to be geniuses. Coming from a very well off family – his grandfather Ed (George Kennedy) started a Los Angles bank that is still thriving year’s later – Bennett’s goal is to get his life back to zero and start over.

Seeing a quick way to achieve this goal, Bennett is lured into the underground gambling dens within Los Angeles. As his debt begins to rack up at an alarming rate, Bennett’s gambling addiction sends him down a dark spiral.

Coming off the success of 2011’s Rise of the Planet of the Apes, director Rupert Wyatt has moved back to character driven stories in the vein of his 2008 film, The Escapist. Remaking Karel Reisz’ 1974 film of the same name, Wyatt presents a completely different version of Los Angeles in his film. There are no obligatory shots of Rodeo Drive, the Capitol building or either the Hollywood or Beverly Hills signs. Instead he displays a seedy world where private casinos are found within the rolling hills, in abandoned swimming pools, and in other less than desirable establishments.

The script by William Monahan (The Departed) is full of rich expression and offbeat characters. The Gambler features two exceptional monologues. One is by Bennett as he strolls around his class room spelling out his genius theory to his students. The other memorable one is by notorious money lender Frank (John Goodman), who lays out to Bennett both the conditions of a potential loan and his “FU money” philosophy. 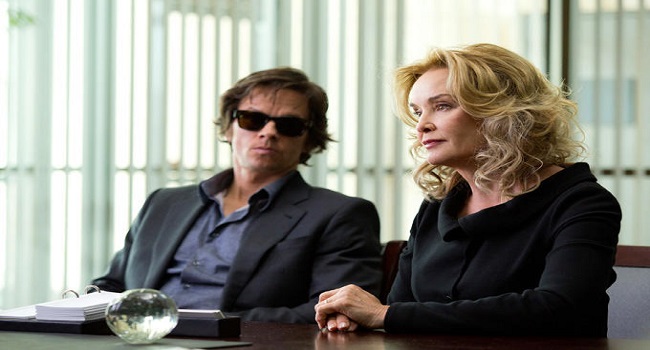 Embracing the role of Bennett, Mark Wahlberg delivers a top-notch performance. He leaves no grey areas within the character’s soar or crash mentality. It is painful to watch Bennett’s steady fall further into debt. Wahlberg plays it well, showing the deep nature of Bennett’s addiction. He is too blind to see the signs, such as the dealers who look upon him with sadness, and berates others even when they are offering him a way out.

Brie Larson does remarkably well in the supporting role of Amy. Her fresh young attitude is juxtaposed well with Bennett’s negative spiral into depression and self-loathing. She does not have much dialogue, however, Larson effectively uses her facial and body expressions to bring her character to life. The cast is rounded out with superior performances from the above mentioned John Goodman, Jessica Lange, and The Wire alums Michael Kenneth Williams and Domenick Lombardozzi.

The strong performances are only enhanced further by the stark visuals of The Gambler. Cinematographer Greig Fraiser is instrumental in presenting Wyatt’s grittier version of Los Angeles. The film is shot in several dark settings. Fraiser plays with outside lighting to bring the figures on screen in into focus, and resets his lens to give the impression that even palm trees do not exist in this seedy take on the city.

The Gambler is a dialogue driven story that does not dishonour the 1974 James Caan version. The film has a strong cast and director Wyatt succeeds with his goal of presenting the griminess of Los Angeles’ dark alleys, basements, nooks and crannies. It’s one of those rare studio driven character films that we seemingly only get once or twice a year. It is a film that I strongly recommend.