Conventional wisdom tells us that when a person goes missing in a film, it is best to follow the clues. Sometimes the key piece of information or evidence needed is obvious, at other times the audience is required to do a bit of digging. Michelangelo Antonioni’s L’Avventura falls into the latter. It is a film that asks, no demands, that the audience put in some work to solve its numerous riddles.

And boy is there a lot of heavy lifting to do.

The story follows a group of wealthy Italians as they take a boat trip to a deserted volcanic island just outside of Sicily. What compelled them to venture to such a desolate place? Antonioni does not provide any concrete answers. We are left to assume that this getaway is merely a result of having nothing better to do. Though they all seem to come from a place of privilege, there is a mixture of sadness and boredom that is prevalent throughout the members of the group. This is most noticable in Anna (Lea Massari), a woman who is growing weary of an increasingly strained relationship with her boyfriend Sandro (Gabriele Ferzetti).

After a rather heated argument on the island, Anna tells Sandro that she wants to be alone. She is never heard from again. Considering that the island is not that large, Anna’s disappearance sends shockwaves through group. Sandro and Anna’s best friend Claudia (Monica Vitti), in particular, takes it rather hard. Did Anna drown? Did she swim to one of the nearby islands? Did she catch a ride with a band of smugglers? Is she hiding in some crevice on the island that they missed?

Once the bulk of the group returns to shore, Sandro decides to follow up on a few leads regarding possible sightings of Anna in nearby towns. It is while on this journey that Sandro, as coincidence would have it, meets up with Claudia, who is conducting a further search of her own. As the pair travels together romantic feelings begin to grow and intensify with each passing day. Is their love genuine or merely a manifestation of the pair’s loneliness? Also, with the possibility of Anna still being alive, can their love every truly be cemented or are they merely passing the time with each other? 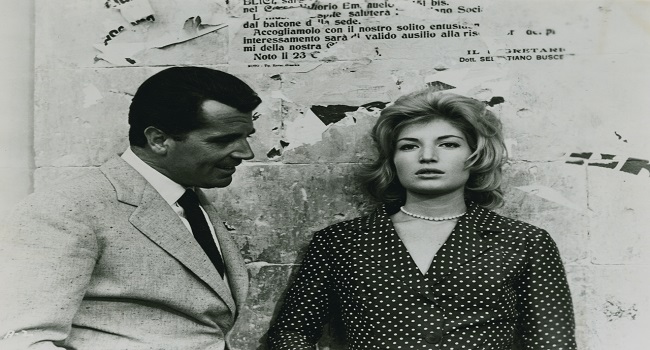 Anna’s vanishing leaves a haunting shadow around L’Avventura that always threatens to consume its characters. That is assuming, of course, that the characters can take a moment away from their own selfish desires to even notice. There comes a point where the audience must question how much Antonioni even cares about divulging Anna’s whereabouts. Antonioni is far more interested in exploring the deep sadness within his characters. Sandro and Claudia only see dreariness while roaming the beautiful Sicilian landscape and proclamations of love are met with questions regarding the validity of the statement. It is rare to come across a mystery where the characters seem so disconnected from the puzzle they should be solving.

It is Antonioni’s unconventional approach to the mystery genre that makes L’Avventura such a treat to watch. He fills the screen with so many lush images that we, like Sandro and Claudia, begin to slowly forget that Anna is missing. The way Michelangelo Antonioni plays with framing is something to behold. He frequently draws our attention to both the foreground and background in many of his shots. Whether he is emphasizing the early disconnect between Sandro and Claudia by purposely placing them on different levels on the island, or simply displaying the power of female sexuality by having a bunch a men swarm around a pretty woman, there is much to savor in Antonioni bountiful visual dish.

A wonderful piece of filmmaking, L’Avventura will surely rub some, especially those who favour more traditional mysteries, the wrong way. The key to enjoying the film is to realize that Anna’s disappearance is not the central element to the film, but rather a side story that Antonioni has no interest in revealing its ending. Instead he is more intrigued by the boredom and sadness that lies within the wealthy. Regardless of whether it is the disappearance of an individual or the prospect of potential new love, the selfish and apathetic natures of Sandro and Claudia will always shine through. Figuring out how the characters will ever change may be the greatest mystery within L’Avventura.