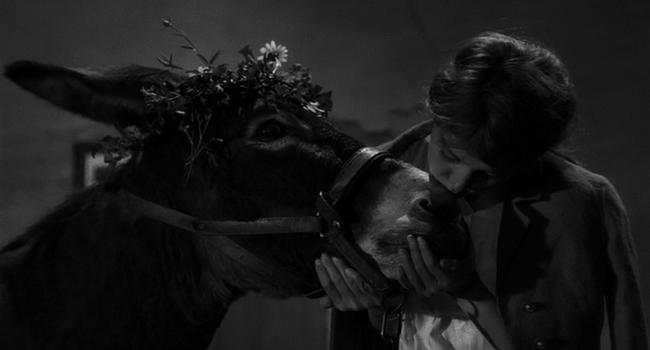 Of all the directors I have encountered in the Blind Spot series, Robert Bresson is the one I find myself struggling with the most. There is a coldness to his films that I find difficult to warm up to. The strange thing is that, being a lover of the deadpan delivery commonly found in Hal Hartley films, one might assume that Bresson would be my cup of tea. However, I still seem to be on the fence as to what to make of his particular brand of filmmaking.

Bresson is a filmmaker whose methods often sounds more interesting than the premise of the films themselves. Of the few things I have read about the director, the common theme that arises is Bresson’s deconstruction process of his actors. Notoriously forcing his actors to repeat scenes over and over, Bresson strives to remove every ounce of “acting” from their performance. It is through this dismantling of all artifice and emotion from his cast that he evokes the most emotion out of his audience.

This technique is not necessarily a recipe for striking gold, at least depending on one’s point of view. Take Bresson’s Pickpocket for example, that film left me underwhelmed despite some inspired moments. The emotionless performance of Martin LaSalle made his character come off cold and selfish, even in moments when we are meant to identify with him. To be honest I was afraid that I would have the same response with Au Hasard Balthazar. The idea of a Bresson film centred around a donkey did not scream exciting evening viewing.

Though my first experience with Bresson left me feeling indifferent, Au Hasard Balthazar filled my head with thoughts regarding life and religion. While the coldness of Bresson’s style was still present, I could not help but be taken by the charms of the film. The most notable being the religious allegory that calmly travels through the film via its four legged protagonist. Balthazar may not utter a single word, but his journey speaks to the nature of sin within mankind.

This is quite an achievement considering how minimalistic the overall plot is. Following Balthazar from birth all the way to death, Bresson documents the various stages of Balthazar’s life through his encounters with others. From early on Bresson presents Balthazar in an almost angelic light. He is baptized by local children, adorned in a crown of flowers, and eventually ends his long arduous travels in front of a flock of sheep.

A silent observer of humanity, Balthazar bears witness to the joys and sins that lay within us all. The fact that Bresson picks a donkey, of all creatures, to carry the weight of man’s burdens is an inspired choice. The simplicity of the donkey, an animal not commonly associated with wit, is nicely juxtaposed with the complicated relationships of the human characters. In many ways Balthazar comes off as the wisest character in the film as he is the only one who seems to realize when it is time to make a break from a bad situation. However, like the rest of us, even Balthazar cannot escape the struggles that come with life.

My experience with this film and Pickpocket, has shown me two different sides to Robert Bresson. While both films have a cold exterior that take a while to chisel through, I found the religious undertones in Au Hasard Balthazar to be far more engaging than my previous encounter with the director’s work. After being impressed by Au Hasard Balthazar, I must admit that I am curious to continue my exploration into the world of Bresson.