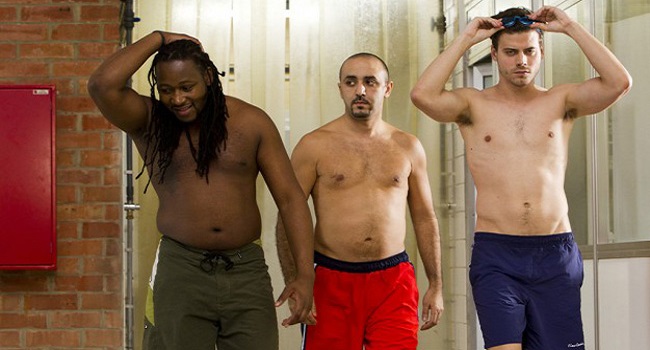 It seems strange that in an era where reality shows such as Showtime’s Gigolos exist, films about male sex workers are still few and far between. This is especially true in the comedy genre where the likes of Deuce Bigalow: Male Gigolo is considered the industry standard simply for lack of other options. Well, we can now add Ismaël Saidi’s Moroccan Gigolos to the relatively small list of gigolo inspired lore.

Saidi’s film focuses on three friends, Samir (Reda Chebchoubi), Nicolas (The Borgias’ François Arnaud), and Dédé (Eddy King), who long to open up their own snack bar business. Having found the perfect location, all the guys need to do is gather 6,000 Euros by the end of the month. However, this proves to be rather difficult since they only have a combined 1,300 Euros to their name.

Things get worse for the trio when Dédé, an illegal African immigrant, gets into a car accident late one night. Panicked by the fact that Dédé does not have a valid license, the men concoct a scheme involving Samir tricking the driver of the other vehicle, Geneviève (Astrid Whettnall), into reporting the accident differently than the way it actually occurred. What the men fail to realize is that Geneviève is really the one pulling the ruse on them. On the prowl for a little intimate fun, Geneviève propositions Samir with a financial deal he cannot refuse.

Stunned that Samir‘s ten minutes of pleasure resulted in 200 Euros, the men agree to start a male escort service which caters exclusively to an older female clientele. Learning the prostitution trade on the fly, the men fumble their way from one encounter to the next while trying to keep their double life a secret. The latter becoming increasing difficult for Samir when his friendship with a client, Catherine (Guylaine Tremblay), begins to impede on his relationship with Nicolas’ sister Clémentine (Stéphanie Van Vyve).

Although its subject matter may seem racy, the immediate thing that will strike you about Moroccan Gigolos is how tame it really is. The film avoids resorting to the raunchy brand of humour that has dominated mainstream comedy over the last few years. In some ways this is both a gift and a curse for the film.

While it is admirable that Saidi attempts to take the high road, Moroccan Gigolos often feels way too safe for its own good. Not to mention that most of the comedic situations the guys find themselves in feel rather dated. Seriously, there is even a joke about how embarrassing it is to buy Viagra at the local pharmacy…need I say more?

Though the gags may be well-trodden, Saidi does offer a refreshing take on the gender roles. Unlike the cartoonish Deuce Bigalow, Saidi rarely tries to get laughs at the expense of the female clients who enlist the men’s services. There are no freakishly deformed women, or jokes about their weight. Instead, it is the men, more specifically the male ego, who endure the brunt of Saidi’s jabs. The females in the film are portrayed simply as real women who are comfortable with themselves and their sexuality. This is why a character like Catherine is frankly more engaging and nuanced than the three male leads in the film.

Moroccan Gigolos pretty much delivers exactly what you expect it to. The film generates some decent, though predictable, laughs while avoiding any real biting commentary. Similar to Samir’s ten minutes of pleasure, you will be modestly satisfied in the short term but the film will not linger long in your mind afterwards.

Screens
Tonight, 7:00pm, at The Royal