Last week I wrote a piece talking about how it is unwise to judge a film’s worth simply based on the casting news. George Clooney’s latest directorial effort, The Monuments Men, is a perfect example of this. Before its release ultimately got pushed back, the film was near the top of many people’s 2013 “must-see” list. Oscar pundits already considered it a lock for Best Picture, amongst other categories, because it looked great on paper. The film featured an all-star cast; was directed by a two time Oscar winner (though for his supporting actor and producer work); and was set during World War II.

Sadly, this was not the recipe for success that many thought it would be.

The problem with The Monuments Men is not that it is a bad film, just an uninspired one. For a film whose intentions are to honour the memory of those who were willing to sacrifice their lives to preserve our cultural history, the film never truly captures the magnitude of their situation or the war as a whole. At times the film feels like a highlight package found in a nightly sportscast. It touches on some key moments from that time period, but does not linger on it long enough for you to feel emotionally invested.

Within the first ten minutes of the film not only is the premise explained, but all the characters are introduced. Clooney is so eager to get to the main course of the story that, like a child quickly devouring a bowl of brussel sprouts just to appease their parents, he shovels down the men’s basic training in a blink of an eye. It is easy to see why he would want to get the the actual journey, as it is an incredible story.

Commissioned by FDR to go on a special mission, the grouped dubbed “The Monuments Men” were a squad comprised of museum directors, curators, and art historians. Though they were not traditional soldiers, their goal was to find and liberate the numerous artworks that the Nazis had stolen for Hitler. Since the war was nearing an end, the men had to race against time to uncover the hidden artifacts before the Nazis destroyed them. 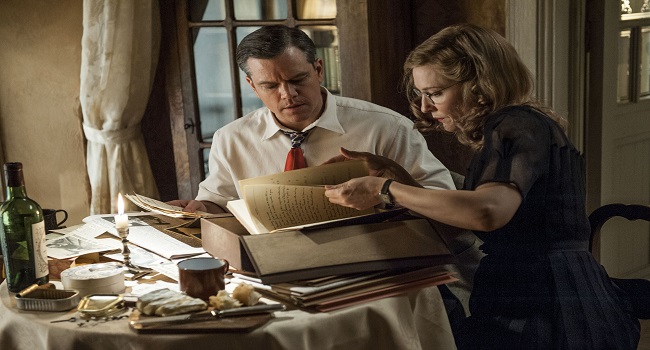 Although billed as a heist film, Clooney never seems to figure out the overall tone he wants for the film. The Monuments Men wants to be both a breezy heist/adventure comedy and a serious World War II drama. It is this Jekyll and Hyde conflict that ultimately hinders the overall impact in the film. There is a sequence in the film where Judy Garland’s rendition of Have Yourself a Merry Little Christmas plays in the background as the men realize the devastating consequences of war. It should have been a haunting, even tear-jerking, moment that really cements the importance of their journey. However, it feels shockingly hollow.

Part of the problem is that the characters are so thinly written that we never truly feel the weight of emotions that rain down on the men during their mission. The fact that Clooney opts for lighthearted comedic moments whenever he gets two or three of his supporting characters together does not help this issue. Unfortunately, as was evident by the sparse laughter in my generationally diverse theatre, Clooney simply does not know how to film comedy effectively.

If you look at Clooney’s directorial works to date, he is at his best when tackling period pieces with bite. When he ventures into comedy, like with Leatherheads, it always comes off too safe. He is so concerned with honouring the memory of “The Monuments Men”, and World War II in general, that the comedic beat feels like it is walking on eggshells careful not to offend. Which makes it so perplexing as to why Clooney did not go for a more serious approach in the first place? The groups accomplishments surely warrant it. Plus the all-star cast, which features Matt Damon, Cate Blanchett, Hugh Bonneville, John Goodman, Bill Murray, Jean Dujardin and Bob Balaban, have proven in other films that they are more than capable of handling heavy material.

Though Clooney’s heart is in the right place, The Monuments Men is not quite the tribute the men deserve. It is so concerned with playing it safe that it inadvertently waters down both the mission and the war as a whole.