There is a comforting beauty to the way director Wim Wenders visualizes a world where angels and humans co-exist. Silently the angels pass from person to person observing not only their lives, but their deepest thoughts as well. The angels may have heavenly wings when perched upon giant statues, but appear as average looking individuals in trench coats when roaming the urban landscape of Berlin. Though they cannot physically alter the course of human life, simple gestures like placing a hand on a shoulder or a pregnant woman’s stomach provides a sense of comfort to the individual.

Like historians, the angels have spent years, possibly centuries, documenting human existence yet still do not have a true grasp of what it means to be human. This is what makes the plight of an angel named Damiel (Bruno Ganz) in Wings of Desire so intriguing to watch. He no longer wants to just record events, but actually feel them like regular humans. Damiel yearns to experiencee the simple pleasures in life such as coming home after a long day and feeding a cat. The joy that comes with taking a shoe off under the table and freeing confined toes. His thirst for the human experience is only amplified when he falls in love with a trapeze artist named Marion (Solveig Dommartin). A heavenly vision on earth, she is first seen practicing her act while wearing fake angel wings, Marion is both beautiful and consumed by thoughts of love and loneliness.

Though the 1998 remake City of Angels captured, to a lesser extent, the sense of wonder and amazement that defines love and the human experience, Wenders’ film takes a more existential approach to life and the film as a whole. Wenders spends a lot of time focusing on the thoughts of everyday individuals. Like Damiel, and his fellow angel Cassiel (Otto Sander), we witness the memories of a holocaust survivor, the resurgence of a once depressed man on the train, and even the dreams of a prostitute worried about being expelled if she is recognized. It is through these folks that Wenders not only brings us into the story, but also allows us to reflect on our own thoughts about life and spirituality.

The film’s pacing and ethereal camera movements only help to magnify the angelic tranquility even further. It is as if Wenders is challenging us to rethink how we view our place in the world. As Marion states at one point, is it possible that the question is not “how I should live”, but rather “how should I think?” We often become so consumed by our own lives that we fail to truly observe the world around us. Could this be why we do not see the numerous angels that circle about us? 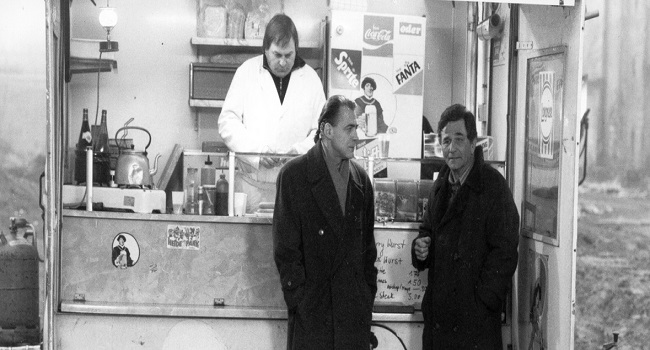 In Wings of Desire the only ones who can see the angels in plain sight are children. Wenders views childhood as an inquisitive stage of life. A time where young minds are constantly observing and questioning not only their own existence, but everything in the world around them. Outside of children, there are only two other people who concede to the existence of angels. One is a blind woman who senses their presence and another is actor Peter Falk. Playing a version of himself, Falk has this wonderful scene at a coffee stand where he acknowledges the presence of the angel he admittedly cannot see. Is he just reciting lines or does he truly feel the presence of a spiritual being? I would tend to believe it is the latter.

Falk is one of the few people in the film who is full of questions. A foreigner to Berlin, he even questions the validity of a book which suggested that Hitler frequently used a body double. There is a childlike innocence to the way Falk moves through both the film set and the city at large. His mind drifts from the Jewish looking nose of the film extra he is sketching to the correlations of extras being extra people. Falk represents the open-mindedness and inquisitive nature that is missing in adulthood.

Wim Wenders’ Wings of Desire is a film that offers much food for thought. The film is not so much about happy endings, though there is one of sorts, but more about observing how everything in the world, both physical and spiritual, are linked. Though we may not be able to see the form they take, the angels are all around us…we just need to be willing to have an open mind.