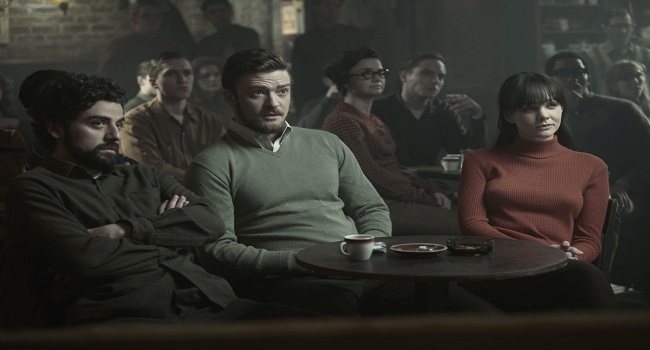 Opening with a simple subtitle, The Gaslight 1961, we meet Llewyn Davis (Oscar Isaac) on stage singing a tune into a gleaming silver microphone. The song is melodic, slow and hushed. It nicely sets the stage for both the character and the journey we are about to embark on with him.

Inside Llewyn Davis is the Coen Brothers look at the early 60s Greenwich Village Folk music scene. The piece follows Davis over a one week period as he gigs at local clubs and crashes on couches of various friends and acquaintances across town, all while trying to get his music career going. As is typical with most Coen Brothers films, Llewyn Davis is not a character that the audience easily warms to. He has a cavalier attitude towards women, is totally unsupportive of fellow acts, is generally cruel to those that give him a place to stay and still has not come to terms with a tragic incident that befell his former musical partner.

The Coens have a habit of torturing their lead characters and Llewyn does not escape that fate. Throughout the film he perpetually appears to be on the cusp of success. However, he always seems to make decisions, such as the one foolish one he makes after a studio gig set up by his friend Jim (Justin Timberlake), that derail his potential future rewards. Davis considers his music as both his life and work, but is unwilling to conform to the popular sound of the time. This is painfully emphasized in Chicago when puts every emotion into the performance for record executive Bud Grossman (F. Murray Abraham) only to receive a response he does not expect.

Similar to most of the Coen Brothers works, Inside Llewyn Davis is expertly presented. The opening subway trip downtown is a visual marvel. The rush of the train, which countdowns the streets from the 130′s through to Pennsylvania Station, mimics the senses of urgency that Davis feels about getting his career off the ground. Cinematographer Bruno Delbonnel presents the piece in a dreary and washed out fashion so that it almost appears as if the viewer is watching a black and white film at times. The lack of colour also punctuates the meager existence of the lead character.

The Coen Brothers supply an abundance of quirky characters for the film. The top among these include Davis’ New York agent Mel Novikoff (Jerry Grayson) and his two travel companions (played by John Goodman and Garrett Hedlund) on his trip to Chicago in search of a record deal. Goodman’s Roland Turner shines in an exchange with Davis regarding the merits of Jazz over the bland three cord structure of Folk music. What brings all of the characters to life so well are the wonderful performances by the ensemble cast. Oscar Isaac is superb in the title role. He conveys Davis as someone who is self-absorbed and mean, but not entirely bad. This is most evident in his unique bond with his friend’s cat aptly named Ulysses. Carey Mulligan is strong in a small role as Jean, his friend Jim’s wife that Davis secretly had romantic relations with. Mulligan appears to have one beat, white hot anger, but shows that even in her rage she still cares for Davis.

Inside Llewyn Davis stands out as a piece in which the viewer will be unable to predict where the narrative will go next. The film marks a return to the Coen Brothers films of the 90s that featured simple stories and quirky characters that resonate with the audience. It is a film that I can highly recommend.