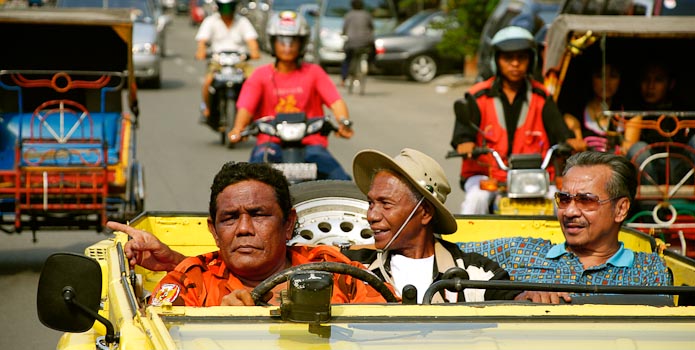 Anwar Congo always seems to have a strut in his step. Dressing like a pimp from the 1970s, Congo fondly recounts a youth filled with dancing, women, and drunken songs with the boys. It is with this same nostalgic fondness that Congo recounts his career as a cold blooded killer. While others would be ashamed to admit such things, Congo sees it as a badge of honour. In his region of Indonesia, Congo, a former gangster who scalped movie tickets turned executioner, is treated like a national hero. It is this chilling contrast that permeates Joshua Oppenheimer’s terrifying and groundbreaking documentary The Act of Killing.

Oppenheimer’s film takes the novel approach of not only getting the information directly from the perpetrators’ mouth, but he actually gets the them to reenact the crimes on camera. His goal is to highlight the atrocities that occurred when the military-lead Indonesian government sanctioned mass murder between 1965 and 1966. Claiming to be exterminating communism, many innocent Indonesians and ethnic Chinese were killed at the hands of a power hungry regime. While Oppenheimer’s film keeps its lens on the men who did the killing, Congo and his pal Herman Kato, it is clear that they are merely the foot soldiers in an increasingly corrupt system.

At one point a prominent and well regarded newspaper editor seems almost perplexed that Oppenheimer is bothering to make a film about Congo and Kato. Calling them “grunts” the editor takes great pride in the fact that he was one of the people actually responsible for sending others to their death. Using his newspaper resources, he would investigate and interrogate the people suspected of being communist. He even went as far as maliciously changing answers to ensure that “the public hated them”. This deceitful propaganda was also found at the government level as violent anti-communists films were made to be shown yearly to young school children.

One of the chilling aspects of all of this is that, in a strange way, Congo sees these types of films as justification for his actions. He is seemingly oblivious to the fact that he has done anything wrong. Though rumored to have killed close to 1,000 people via wire strangulation, Congo is excited by the idea of a film being made about his exploits. He remarks that even if the film does not hit the big screen like the stuff MGM produces, he is happy that the younger generation will have a record of his actions. After all, what is a hero if no one tells the tale of his “heroic” deeds.

The concept of film being a tool for documenting life takes an interesting, and terrifying, twist in The Act of Killing. Film is used as both a window into the heart of darkness and as an enabler. In regards to the latter, Congo and Kato take great pleasure in being able to live out their fantasies of being like Elvis and Al Pacino. They not only gladly play themselves in the film within the film moments, but also play the roles of the victims as well. Kato in particular seems to revel in dressing up in drag for some of the female roles. Instead of being horrified by the excerpts of footage they see, Cong and Kato seem more concerned with their clothing and how much grittier their performances need to be. However, playing the role of the victim does seem to lead to a momentary breakthrough for Congo, in regards to understanding the consequences of his actions, though one wonders if it will last or merely become another dream that haunts him at night.

As haunting and mesmerizing as The Act of Killing is, Oppenheimer’s film does tend to run on the long side. Some of the side stories he follows may reinforce the disturbing mindset of Indonesian government, the gangsters and paramilitary people they employed, but by this point we are already well onboard with Oppenheimer’s message. It would have better served the film if Oppenheimer had gotten a few individuals not associated with the government to share their stories. Of course I understand his reluctance to do so, as it is not every day that a filmmaker comes across subjects as open and blissfully unaware as Congo and Kato. The Act of Killing will leave you shocked and horrified by the candor and misguided ideals the men display on screen. It is a film unlike anything you have seen before or will probably see again. The Act of Killing is amongst the year’s best films.