This past May marked 100 years of Indian cinema. Despite being a billion dollar industry, I am almost ashamed to admit how few Bollywood I have seen. However, after watching Bombay Talkies, a joyous love letter to Indian cinema, I am determined to correct this particular cinematic blind spot of mine.

Made by four renowned independent directors, Bombay Talkies is an anthology film which highlights the power of cinema. Each segment not only expresses a love for film in general, but also provides several nods to the iconic Indian films that helped to shape Bollywood. One of the beautiful aspects of Bombay Talkies is that you do not need to be well-versed in Bollywood to appreciate the film. If you are a lover of cinema in general, then the film will undoubtedly put a huge smile you face. After all there is nothing cinephiles enjoy more than films about film. While a delight to watch, picking the standouts, as is the case with most anthology films, will vary depending on personal taste.

The first short, titled Ajeeb Dastaan Hai Yeh, follows a gay man, Avinash (Saqib Saleem), who leaves his parents home only to find himself impacting the life of his boss Gayatri (Rani Mukherjee) and her husband Dev (Randeep Hooda). After being invited over for dinner, Avinash and the stoic Dev realize that they have a shared love of the music made by a famed Bollywood composer. Directed Karan Johar’s film is an interesting character study that takes some nice unexpected turns. This is rather refreshing considering the traditional path it seems to be following at first. I particularly liked how Johar handles the inner conflict that Dev finds himself in. The use of the poor girl as the chorus who ties it all together was an inspired choice. Especially considering the way Johar plays with the themes of music and loneliness.

My favourite segment of the four was easily Dibakar Banerjee’s film Star. The story revolves around a failed actor, Purandar (Nawazuddin Siddiqui), who is struggling to find work outside of the entertainment business. By a strange twist of fate, Purandar ends up being cast on the spot to be an extra in a scene with one of the top Bollywood stars. However, Purandar takes issue with the fact that his one line in the film is not of the quality he expects. This prompts the ghost of his former acting coach to appear to share some words of wisdom about what is important in film and in life. For myself, Star perfectly captures what makes both Bombay Talkies, and the world of film in general, so rewarding. It is poignant and amusing while still finding a way to evoke a sense of imagination and wonder. Siddiqui is outstanding as a father who cares more about impressing his young daughter with bedtime stories than he does about money or fame. I could watch the silent scene in which Purandar recounts his day to his daughter for hours. 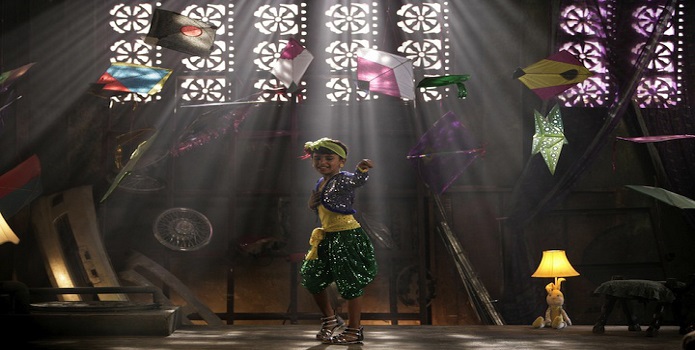 The theme of staying true to one’s dreams is the driving force behind Zoya Akhtar’s Sheila Ki Jawaani. This charming story is about a 12 year-old boy named Vicky (Naman Jain) whose dream is to be a dancer like his idol, actress Katrina Kaif. Vicky even takes to putting on makeup and his mother’s clothes in order to be more like Kaif. Of course this does not sit well with Vicky’s father who wants him to learn how to be strong by playing sports. Though the concept of a young boy being infatuated by films is a common trope, Akhtar offers a fresh take on it by playing with the conventional thoughts around gender. While gender roles are a subtly touched on, the piece wisely keeps its focus on the ways others often hamper our dreams and goals. Thanks to the great work of his cast, Jain especially, Akhtar effectively conveys his message without coming across as preachy. Sheila Ki Jawaani is a delightful example of why it is important to keep your dreams alive, even if you must sometimes hide it from others.

The last segment, Murabba, has the silliest premise of the four. Vijay (Vineet Kumar Singh) is asked by his father to travel to Mumbai and locate famed actor Amitabh Bachchan. Vijay must get Bachchan to take a bite of his father’ homemade amla murabba and bring the remaining piece back to his father. Though Anurag Kashyap’s film runs a little long, it does a solid job of keeping audiences laughing. It is obvious from the beginning that Vijay’s journey would not be a smooth one. In this celebrity obsessed society, one does not just walk through an actor’s front door, especially one as famous as Amitabh Bachchan. For his part, Bachchan has fun playing up the almost holy version of himself on screen. While our fascination with celebrity culture is prevalent in the short, Kashyap also has fun exploring family traditions and the nonsensical places that they often originate from.

If being entertained by four vignettes was not enough to wet one’s appetite for more Bollywood, then the glorious montage at the end of the film will seal the deal. The film even throws in a sensational musical number, featuring the legends and current stars of Bollywood, for good measure. Watching the images from some of the most influential films in Indian cinema just reinforced how much more I need to delve into Indian cinema. Regardless of whether or not you are well-versed in Bollywood, Bombay Talkies is a must-see for all cinema lovers. It is a film that captures the magical allure that film has on all of us.