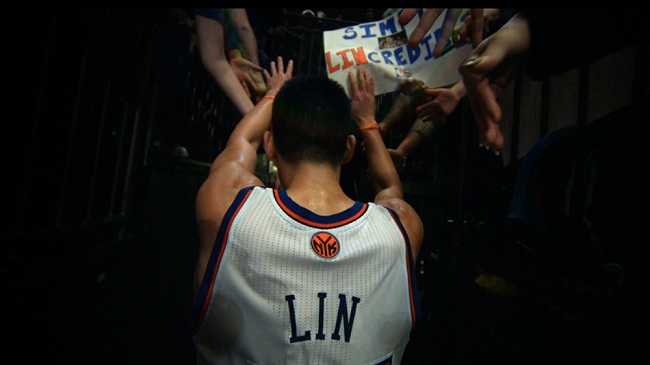 Hardcore basketball fans, and even the most casual of observers, will be familiar with the term “Linsanity.” It is a reference to a moment in time when an Asian American point guard, Jeremy Lin, defied the odds and captured the heart of the world in the process. Evan Jackson Leong’s documentary, Linsanity, tracks how a young man from Palo Alto, California found the drive to fulfill his NBA dreams.

Leong dives into Jeremy’s past to document how his passion for basketball was shaped by his father’s love of the sport. Narrated by Lost‘s Daniel Dae Kim, the film meticulously charts Lin’s turbulent rise from high school player to NBA star. Though his talent was never in question, the fact of the matter was that Lin did not fit the image of what a typical basketball player looked like. This meant that Lin had to continuously fight to prove his worth at every stage of his career.

Those who followed Lin at the peak of the media frenzy will be familiar with much of the ground that Leong’s film covers. One of the biggest revelations, if it can even be called that, is the role that spirituality plays both in Lin’s life and in the film. A devout Christian, Lin’s faith is prominently on display throughout the film. Lin’s spiritual adviser gets nearly as much screen time as many of the basketball coaches and experts that Leong’s interviews.

While Lin’s commitment to his family and his faith are at the core of the film, the film really hits its stride when Leong’s focuses on the racism that Lin endured. The film does a nice job of highlighting the numerous racial comments and stereotypes many media outlets, some shockingly unaware, were conveying at the height of “Linsanity”. It would have been fascinating to see Leong delve into this stream of exploration even further than he does.

By playing it a little more on the safe side, Linsanity comes across as a standard rags to riches tale. Fortunately, Lin’s charisma and faith are what give the film its earnest motivational kick. It is clear that Leong and Lin want the film to be a platform of hope and encouragement for those who are marginalized unfairly. While Linsanity may not be as spellbinding as other basketball documentaries such as Hoop Dreams, which explores the life of two inner-city basketball player, or More Than a Game, which looks at the rise of LeBron James, it is still very effective for what it is. Linsanity is a satisfying and inspiring tale about staying true to your dreams in the face of adversity.