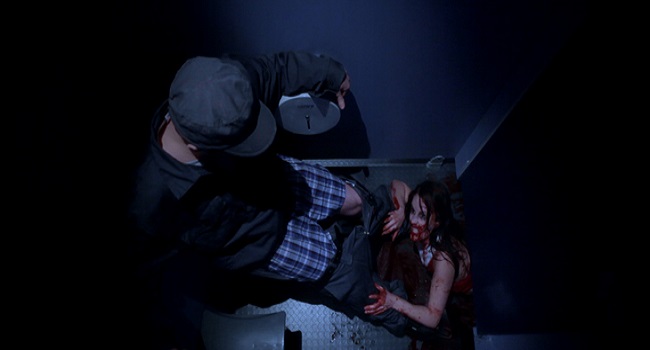 It is hard not to think of a film like Shaun of the Dead when watching Stalled. Though both are UK zombie comedies they are vastly different in almost every way, most notably in regards to execution. While Stalled has a rather novel premise, it lacks the one crucial thing that Shaun of the Dead had in spades…characters you actually care about. Though director Christian James tries his best to keep his zombified tale of redemption moving at a decent pace, he cannot hide the numerous problems with the script.

Written by Dan Palmer, and set on Christmas Eve, Stalled tells the tale of a hapless janitor who finds himself in one sticky predicament. W.C. (Palmer) would love nothing more than to end his shift, go home and forget his miserable existence for a few hours. Unfortunately, he finds himself stuck in the women’s washroom just as the zombie apocalypse occurs. With only the voice of one other living person to keep him company, Heather (Antonia Bernath) two stalls away, W.C. must figure out how to avoid becoming a Christmas meal for the horde of zombies.

The main qualm I had with Stalled is that at no point did I remotely care about W.C. Though many of his actions are played for laughs, he is still an unlikable character whose redemption comes at the needless expense of others. His selfishness becomes increasingly annoying as the zombie infestation worsens. It also does not help that the few female characters featured in the film are either portrayed as insecure or shallow and promiscuous. One of the reasons W.C. gets stuck in the washroom in the first place is because he is watching two scantily clad business women making out.

Though Stalled did not deliver the level of fun I was hoping for, it was not all doom and gloom. In fact, I think the film would have been far more successful as a short instead of a feature length film. There are some truly inspired moments in the film, including the running gag about the handsome Jeff from I.T. (Mark Holden). I especially liked the use of a drawing to represent what W.C. envisions the female he is talking to might look like. The drug induced dance number also offered a few chuckles.

Considering how flooded the zombie genre is at the moment, it takes a fully realized idea to make a zombie film stand out from the pack. One just needs to look at the wonderfully melancholy film The Battery, which also screened at Toronto After Dark this year, as proof of how you can do a lot with few resources. By setting the majority of the action with the confines of a washroom, Palmer and James inadvertently limit themselves in both character depth and overall humour. There is a good concept buried within Stalled, it is just a shame that the main character is not someone I wanted to invest my time in.