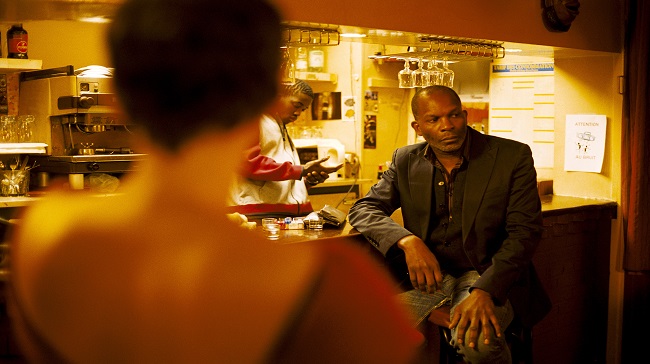 On the list of prominent female directors working today, Claire Denis is one who has sorely been in my blind spot. As the TIFF Lightbox launches its retrospective entitled Object of Desire: The Cinema of Claire Denis, to coincide with the release of her latest film Bastards this week, now seems like a great time to start filling in my cinematic gaps in regard to Denis. Since 35 Shots of Rum was my first attempt at tackling her work, I had no idea what to expect. Considering the number of films I have watched about dysfunctional families, it actually took me a while to get my head around Denis’ observation of a family that, by all accounts, is working well.

The characters in 35 Shots of Rum exist in a comfortable place where the biggest issue is not each other, but the possibility of change in the future. The film follows four individuals who live in the same Parisian complex. The central figure is Lionel (Alex Descas) a quiet man who works as a train-driver. A simple man, Lionel does his best to raise his daughter Joséphine (Mati Diop), a student who works nights at a music store. Lionel and Joséphine live a peaceful existence where they simply enjoy each others’ company. They each make concessions, including minor things like Josephine hiding her new rice cooker in order to not upset her father who unknowingly bought her one that same day, to ensure that their way of life never changes.

While Lionel and Josephine are content with each other’s company, they also acknowledge the makeshift family that they have established with two other individuals in the building. The first being Lionel’s ex-girlfriend, Gabrielle (Nicole Dogué), who, despite dealing with the occasional annoying customer, loves her work as a cab driver. The other key person in the group is Noé (Grégoire Colin), a family friend who claims the only thing that is keeping him from travelling is his cat. Of course, it quickly becomes apparent that Noé’s attraction to Joséphine may also play a role. However, similar to Lionel and Gabrielle’s unspoken relationship, there is a hesitation on both Noe and Joséphine’s part to follow through with their desire for fear of ruining the life they have each grown accustomed to.

It is only when one of Lionel’s colleagues retires, reluctantly mind you, that Lionel starts to ponder if he will be as miserable as his co-worker when his time comes. Fearing the forced change that will come in a few years, Lionel instructs Joséphine to look after her own happiness and not to worry about him. Despite the fact that his warning is meant to be taken in a “if this happens in the future” sort of way, the fact of the matter is that the concept of change has already begun to seep into their dynamics. Claire Denis takes a slow and methodical approach to observing how life forces you to change regardless of whether or not you are ready.

Denis uses one of the films’ happiest moments, when the four characters get stranded in a restaurant, to highlight the storm brewing within the group. Instead of emphasizing this through dramatic moments where the characters scream and yell at each other or make powerful speeches, Denis takes a far quieter approach. She merely conveys all the emotion through the characters eyes. Tension is shown through the stern look that Lionel displays when he catches Joséphine and Noé kissing. Denis repeats that look from Gabrielle’s perspective, as she sees Lionel dancing with the pretty restaurant owner, and a tinge of sadness gets added to the unspoken conflict.

While Denis offers an interesting take on those who are reluctant to change due to their current contentment, 35 Shots of Rum was a bit of a challenge to get through at times. Part of the struggle was due to the slow pacing of the film. 35 Shots of Rum takes so long to find its stride, that I am not sure the payoff really met my anticipation. As a result, while a perfectly fine film, I did not have that same sense of love and praise for 35 Shots of Rum that others seemed to have. Who knows, my views of this film may change after I delve into more of Denis’ cinematic canon. As it stands, 35 Shots of Rum is a solid, if slightly underwhelming, film.